Celebration of Joel Cornette’s Life to Be Held at Hinkle

A celebration of Joel Cornette’s life will be held at Hinkle Fieldhouse on Monday, August 22, at 11 a.m. The service is open to the public. Doors will open at 10:30 a.m. Attendees are invited to park in the main Hinkle lot (please utilize the parking garage near Scotty’s Brewhouse if the main Hinkle lot becomes full). Please enter through Gates 2 and 3.

Cornette, who was a key member of Butler’s first Sweet 16 team, passed away early on the morning of August 16 due to natural causes. He was 35. One of the most popular student-athletes in Butler history, he was known for his outgoing personality, quick wit, trademark smile, and toughness that so many identify with Butler teams, especially of his era. He embodied The Butler Way.

Tributes to Cornette can be found here and here. 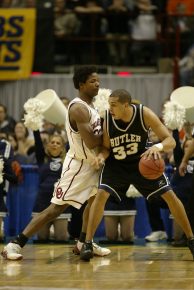 NCAA Tournament appearances in his four years, including the program’s first Sweet 16 in 2003. The Bulldogs also made the NIT in 2002. He scored 1,100 career points and pulled down 712 rebounds, marks that are 33rd and tenth respectively in Butler history. His 144 career blocks and .544 career field goal percentage also rank among the Top 10 in Butler history.

Cornette was named to the Midwestern Collegiate Conference/Horizon League All-Defensive Team in 2000-01, 2001-02 and 2002-03. He earned second-team All-League honors in 2002-03. Cornette served on the Butler coaching staff for the 2006-07 season as the team’s coordinator of basketball operations before going to Iowa as a member of Todd Lickliter’s staff. Cornette grew up in Cincinnati, Ohio, starring for St. Xavier High School. An NBPA-certified player-agent, Cornette served as the Director of Basketball Recruiting at Priority Sports since January 2012.