Butler Theatre will present a free reading of Kurt Vonnegut’s play Happy Birthday, Wanda June on Thursday, September 8, at 7:00 PM in the Schrott Center for the Arts, part of a week of events leading up to the Indianapolis Opera’s September 16 world premiere of Happy Birthday, Wanda June, written by Vonnegut and Butler University School of Music Professor Richard Clark. 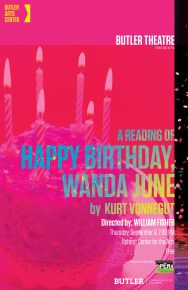 The staged reading will feature six local professional Equity actors and four Butler Theatre students reading the play, which was written in 1970 as a protest against the Vietnam War.

“The writing is serious and it’s witty,” said Theatre Professor William Fisher, who is directing the staged reading. “There is a comic musicality to the language and to the writing. Vonnegut, who was such a great storyteller, had a strong sense of theater in all of his writing. But this is an anti-violence, anti-war play on a lot of levels, and it’s challenging on a level of the way we tell ourselves war stories and stories of heroism.”

The plot of Happy Birthday, Wanda June is based loosely on the Greek legends of Odysseus and Penelope—it involves the unexpected return of a mercenary career solider/hunter named Harold Ryan and his wife, Penelope. When Harold left Penelope, she was a ditzy carhop; when he returns after eight years lost in the Amazon, he finds that she has gone to college, majored in English lit and changed her attitude about the macho man she married.

Fisher said reading the play—rather than performing it—has allowed him some liberties as a director. For one, he didn’t have to cast to type. A young woman is going to read the part of the son.

In addition, while the actors will be limited in their movements, sound effects are an important element of the play, so he may use sounds or he may have the actors read the stage directions.

For Fisher, who has been a fan of Vonnegut’s script since its release in 1971, this will be the first time to direct Happy Birthday, Wanda June.

“I’m happy to have this opportunity,” he said. “This is part of Butler’s contribution to the bicentennial, to commemorate Indiana writers and the great Kurt Vonnegut, and to celebrate Richard Clark’s opera.”

Numerous other Vonnegut-related events are scheduled as well. Tickets for these events are available at www.IndyOpera.org:

-Brunch of Champions, Sunday, September 11, 12:30-2:30 PM, at Bluebeard, 653 Virginia Avenue. The cast of Happy Birthday, Wanda June dines and talks about the creative process, Vonnegut and music. Brunch consists of a three-course meal including dessert and a specialty cocktail.

-The opera Happy Birthday, Wanda June, September 16-18, with curtain times at 8:00 PM, 7:30 PM, and 2:30 PM, respectively. The opera has an embargoed surprise ending to be revealed on opening night of the world premiere. The opera is a joint project between Kurt Vonnegut and Clark, who worked on it together for some years in Vonnegut’s New York brownstone. Directed by Metropolitan Opera Stage Director Eric Einhorn, the work has received the endorsement of the Indiana Bicentennial Commission as a Legacy Project.