Butler Welcomes Its Largest Class Ever 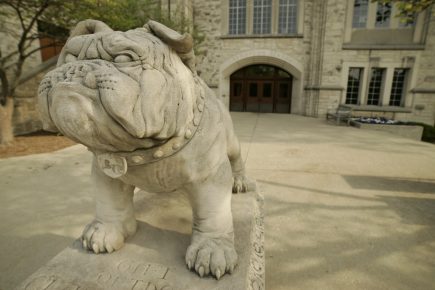 Butler’s Class of 2020 continues the University’s track record of attracting high-quality, academically prepared students. Here’s a look at some numbers.

Nearly 16 percent of the class are U.S. students of color or international citizens.

The most popular majors this year are Pre-Pharmacy (135), Exploratory Studies (109), and Biology and Exploratory Business (both with 81).

Josh Ford (Newburgh, Indiana), who actively participates in and promotes the Make-a-Wish Foundation. He was a recipient of a wish as a seventh-grader and has been a spokesperson for the organization since.

In addition, members of the first-year class have:

-Started a service/support group (In The Dark) to help counsel athletes going through post-concussion syndrome.

–Been published by The Los Angeles Times.

–Organized a fundraiser for a classmate that raised over $10,000 for a liver transplant.

-Played violin with an international orchestra at Carnegie Hall.

The University will also welcome 90 new transfer students to campus this fall.