A Week of Math? 14 Students Say Yes, Thank You

Investigating the Rubik’s cube, comparing contracts for restricted free agents in the NBA, and constructing Cantor polynomials—those were just some of the research projects Butler students undertook during this year’s Mathematics Research Camp, an eight-day intensive experience designed to introduce students to mathematical research. 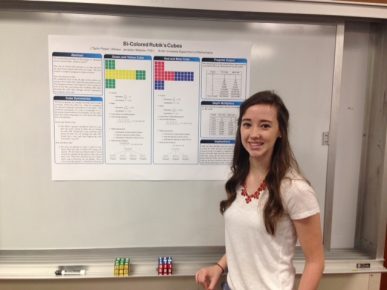 Taylor Pieper shows off her work.

On the first day, faculty mentors gave quick presentations about different, unsolved math problems they thought the students would be interested in trying to solve. The students selected their problem and faculty member to work with, then spent the week working on calculations and preparing a poster explaining their results.

They displayed the results of their work during a poster session August 15 in Jordan Hall Room 236.

“We wanted to provide an experience for our students where they would be engaged in an independent study that they could develop into strong mathematical research,” said Bill Johnston, Chair of the Department of Mathematics and Actuarial Sciences. “We’re not aware of any other institution doing this the way we do it.”

Johnston said the students, rising sophomores to rising seniors, will continue to do research with their faculty mentors throughout the 2016-2017 academic year.

“We think every single one of these students has significant results that we’re encouraging them to go to research conferences to present and certainly at Butler’s Undergraduate Research Conference,” he said.

Justina Kaiser, a senior from Highland, Indiana, who did her research on constructing Cantor polynomials, said the week was fueled by “a lot of coffee, a lot of math, and a lot of wondering how math actually fit into everything. It was a lot of fun trying to see how everyone worked on their own projects.”

“I had a lot of hours to work on this, and I had a lot of attention from my adviser, Dr. (Rasitha) Jayasekare, which is great,” he said. 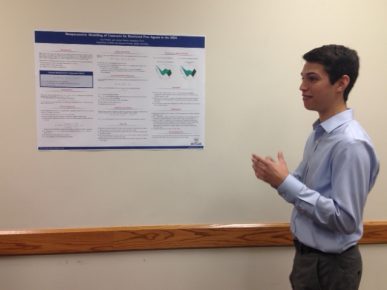 Taylor Pieper, a senior from Greenwood, Indiana, said her work on the Rubik’s cube, taught her a lot about group theory and also provided her with a crash course in computer programming that she used on her calculations.

“And not only did I learn about what I was doing,” she said, “but I learned about what the other students were doing in conversations at lunch and dinner.”

Johnston said he was pleasantly surprised by the work that came out of this third-annual camp.

“We have all been surprised,” he said, “that in only eight days, students can get the kind of mathematical results that these students did. They’re terrific.”