Butler students should do volunteer work, study abroad, and incorporate one thing a day into their lives that provides someone else with genuine opportunity, author Kelsey Timmerman told first-year students on Monday, August 22, at Clowes Hall as part of Academic Day. 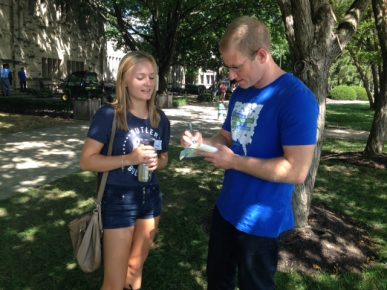 Kelsey Timmerman signs his book for Kimi Selgrad, a first-year student from Chicago.

Timmerman, the author of Where Am I Wearing?: A Global Tour to the Countries, Factories, and People That Make Our Clothes, the Common Read book given to all first-year students, said they need to realize that a college education is a privilege. They should use what they learn to have a positive impact on the world, he said.

“To be able to go to a college like this to get an education—the fact that they’re here, they’ve already won the global lottery,” Timmerman said in an interview after his hour-long talk. “Ninety-three percent of the people in the world don’t get a college degree. The kind of education they’re going to get and the responsibility that comes with that education is the point I like to underline. With that great opportunity comes great responsibility.”

Timmerman told the students they should expect to have at least one class that changes their life. For him, as a student at Miami University in Oxford, Ohio, that was an Introduction to Anthropology class that helped him begin to see the world from other people’s points of view.

In 2005, four years after he graduated, Timmerman decided to travel to Honduras to see where a T-shirt he was wearing had been made. That began years of travel to talk to people around the globe who make clothing that is shipped to America.

In his follow-up book, Where Am I Eating?: An Adventure Through the Global Food Economy with Discussion Questions and a Guide to Going “Glocal,” among the people Timmerman met were a worker who harvested coffee beans for Starbucks but had never heard of Starbucks and a young man who had come from Ghana to the Ivory Coast to pick cocoa beans. The cocoa picker called his boss “master” and told Timmerman that the donkeys were treated better than he was.

While this appears to be an example of modern-day slavery, Timmerman asked the students to consider whether it was exploitation “or is this the best opportunity before him?”

Timmerman said his education and his experiences broadened his perspective and taught him that questions like that need to be asked.

“The curiosity my education inspired in me,” he told the students, “has been priceless.”

Tagged with → Butler University • common read • Kelsey Timmerman • Where Am I Eating? • Where Am I Wearing?
Please share it!