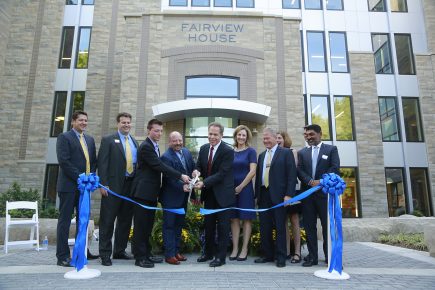 The residence hall features three- and four-bedroom pods with two students to a room. Each pair of students shares a bathroom, and each has his or her own sink and large closet.

Fairview House is also equipped with the kinds of amenities that today’s students demand, including kitchenettes and living rooms in each pod, recreation and media lounges, soft spaces for study, and laundry facilities on each floor. The residence hall also has a large multipurpose room—“a living room for the campus”—that will be used for conferences, events, and other gatherings.

“It all adds up to living conditions that are on par with our classroom offerings, giving Butler students the best of both worlds,” Keith Burks, Chair of Butler’s Board of Trustees, told an audience of students, faculty, staff, trustees, and dignitaries.

Fairview House is the result of a partnership between Butler University and American Campus Communities. Under the agreement, American Campus built and will maintain the facility, while Butler will provide staff to manage the building.