Outstanding Alumni to Be Recognized at Homecoming ’16

Butler University will hold the annual Alumni Awards Recognition Program for extraordinary professional achievement and service to the University and their communities on Friday, October 7, at 6:00 PM in the Howard L. Schrott Center for the Arts as part of Homecoming Weekend festivities.

This year’s recipients are:

Recognition of the 50th Reunion—Members of the Class of 1966

More about the recipients and their awards follows. 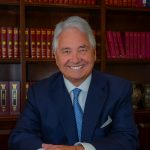 John Hargrove was elected to the Butler University Board of Trustees in 2001 and served as Board Chair from 2008 to 2011, a period which included Butler’s installation in Phi Beta Kappa, budget surplus, record enrollment and, of course, the Dawgs’ appearance in back-to-back NCAA basketball national championship games. In 2014 he was named Butler’s first Board of Trustees Chair Emeritus. 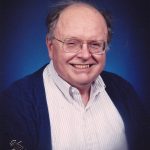 George W. Geib is Emeritus Professor of History. He was a member of the Butler History faculty from 1965–2014 and served as Director of the American Studies Program; Chairman of the Butler Faculty Assembly; Head of the Department of History, Political Science, and Geography; and acting Dean of the College of Liberal Arts and Sciences. He won several awards for outstanding teaching, including the Mortar Board Scarlet Quill award and the Dr. John Morton Finney Jr. Award for Excellence in Legal Education.

He is the author of approximately 50 scholarly articles and chapters, and author or co-author of four books on Indiana history.

He will be awarded the Butler Service Medal, which recognizes emeriti faculty or retired faculty and staff (alumnus or non-alumnus) for a lifetime of distinguished service to Butler University and to the community. 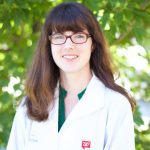 Amy N. Lenell is a Pharmacy Manager for Walgreen Co. in Indianapolis whose focus is to bring the highest level of care to patients in the community practice setting, to promote health and wellness in her community, and to enhance the education of future pharmacists.

She has served as a liaison between Walgreen Co. and Butler since she graduated in 2007, even getting her employer to implement a new position that she developed to support student experiential education. Seeing the need to promote progressive community pharmacy practice to pharmacy students, she developed the Student Programs Coordinator position through which she interacts with Butler students and fosters high quality experiential education for students at the programmatic level for her company and serves as a preceptor at the pharmacy at which she serves as a manager.

Her service to the University also includes lecturing on a range of topics, being a mentor for projects done by senior-level Doctor of Pharmacy students, volunteering at the Butler University Community Outreach Pharmacy, and training and advising other preceptors.

The award she is receiving is named for Joseph Irwin Sweeney, whose student career was cut short when he suffered an untimely death in summer 1900 prior to his senior year. It goes to an alumnus or alumna who has graduated within the past 15 years. 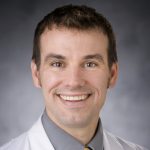 Shawn M. Gage is a Clinical Liaison for Humacyte Inc., a biotechnology company in North Carolina’s Research Triangle Park that is a pioneer in human vascular tissue engineering technologies.

In 2013, Gage and vascular surgeon Jeffrey H. Lawson implanted a bioengineered blood vessel into the arm of a patient with end stage kidney disease at Duke University Medical Center. It was the first procedure of its kind in the United States. He was also involved in the translational research and pre-clinical studies of the procedure.

Currently, he teaches surgeons how to perform the procedure and handle the bioengineered product. The initial focus was on kidney hemodialysis patients to provide an alternative to current synthetic vascular grafts, which are prone to clotting. According to biomedical engineers, the bioengineered blood vessel contains no biological properties that would cause organ rejection. 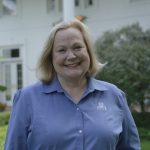 Maribeth Zay Fischer graduated as the Top Female Student in the Class of 1974. Among her activities were Angel Flight, Spurs, Mortar Board, Phi Alpha Theta and Phi Kappa Phi honoraries, and Pi Beta Phi Fraternity, of which she was President. But she considers her marriage to Thomas J. Fischer (Top Ten Male Student of the Class of 1975) her most significant honor.

She grew up in Huntington, Indiana, but returned to her birthplace of Indianapolis to major in history and political science at the alma mater of her parents, Rees E. Zay ’51 and Catherine J. Hart ’50. She was followed at Butler by two sisters, a brother-in-law, a cousin, and a niece. With such pervasive Butler connections, she established the Zay Legacy Scholarship with a preference for families with more than one student in college at the same time.

Also, she underwrote the Journalism Director’s Office in the Fairbanks College of Communication, naming it for her first employer and mentor, James C. Quayle, publisher of The Huntington Herald-Press.

Fischer graduated from Indiana University School of Law and worked as an attorney for AMAX Coal Company, Weyerhaeuser Company, and Ice Miller law firm. She has served on the steering committees of the Ovid Butler Society and the Central Indiana Alumni Chapter. She has stayed connected to Pi Beta Phi Fraternity as an advisor to the collegiate chapter, an alumnae club officer, and a tutor and fundraiser for literacy initiatives. She has been a committee chairman for the Heartland Film Festival and was a longtime class advisor and volunteer with the Brebeuf Jesuit Mothers’ Association.

She is receiving the Katharine Merrill Graydon Alumni Service Award, which is presented to an alumnus or alumna of more than 15 years for outstanding service to Butler University. 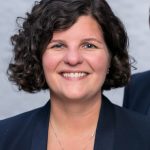 As a reporter for CNN.com and a producer and editor for CNN’s medical unit, Christensen helps shape the editorial direction of the unit and also produces stories and documentaries for Sanjay Gupta and Elizabeth Cohen, does data analysis, manages the webpage, leads the social media strategy, and designs interactives for CNN.com.

Christensen has earned the highest awards in broadcasting—the Peabody and DuPont, producing Christiane Amanpour’s God’s (Jewish) Warriors, a documentary series she helped create while working in the Middle East that covered fundamentalism in the Abrahamic faiths that the New York Times review called “ambitious” and “compelling,” and was the most viewed documentary in CNN history.

She is being honored with the Robert Todd Duncan Alumni Achievement Award, which is presented to a Butler alumnus or alumna of more than 15 years for outstanding contributions in a career field or to society. 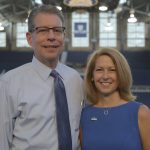 Chris Wirthwein, the CEO of Carmel, Indiana-based marketing firm 5MetaCom, and Sally (McFarland) served as cabinet members for the Campaign for Hinkle Fieldhouse. They also were co-creators of and donors to the Hinkle Fieldhouse History Museum Exhibit located in Hinkle Fieldhouse Concourse. Their philanthropy funded several of the historical displays featured in the south lobby of Hinkle Fieldhouse. Sally promotes the Fieldhouse through her Twitter account @HistoricHinkle and has assisted several media outlets with information/photographs for their stories on Hinkle.

Sally is serving her fourth term as a Facility Corporation Board member of Gamma Chapter of Kappa Alpha Theta (Butler). Chris served as Board Chairman of the Indiana Gamma (Butler) Phi Delta Theta Housing Corp. from 2004–2006.

Chris’s brother Kevin and sisters Susan and Lisa are Butler alumni, and his grandfather Wilbur Fillmore Dassel attended Indiana Law School at Butler in the 1920s. Chris and Sally’s daughter Grace is a 2013 Butler graduate and a member of the Young Alumni Board.

The Mortar Award, created in 1995, honors one person or couple each year who personifies the Butler spirit by demonstrating great vision, leadership, and generosity to Butler University. 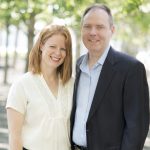 Jennifer (Bougher) White is a litigation counsel in the New York office Arent Fox LLP. She has significant experience representing clients in federal and state court litigation, as well as international and domestic arbitration. Jennifer also serves as mediator in commercial disputes, and represents litigants in mediations and negotiations.

Jennifer has served on the Alumni Board for a number of years and currently serves as the board’s Secretary. She has been President of the Greater New York Alumni Chapter, helped organize a number of successful alumni outings, and has been a key figure in supporting Butler during its moves to both the Atlantic 10 and BIG EAST. She also has helped foster connections between Advancement and NYC area alumni, assisted in finding locations for dinners and events, and helped promote the Campaign for Hinkle Fieldhouse.

Her husband, David, a Professor of Law at Seton Hall University, is a passionate non-Butler graduate. He and Jennifer have been ardent supporters of the Butler basketball team for more than a decade and followed the Butler Bulldogs around the country during their NCAA tournament runs. David is always at Jennifer’s side for Butler-related events in New York and has made many trips back to the Butler campus. He has long offered his assistance to Butler graduates seeking a career in law. During his tenure as President, Bobby Fong once publicly recognized David for his enthusiastic support of Butler University.

The Foundation Award, created in 2011, honors one person or couple (age 40 and younger) each year who personifies the Butler spirit by demonstrating leadership and generosity to Butler University.

In addition to these recipients, Butler University will recognize the 50th anniversary of the Class of 1966. Reservations for the awards ceremony in addition to all Homecoming activities can be made online beginning August 26 at www.butler.edu/homecoming or by calling 800-368-6852, ext. 9946.