Longtime Butler Professor of Voice André Aerne died on Sunday, October 16, in Petoskey, Michigan. He was 84.

Aerne taught at Butler from 1966-1998 and also was often featured as a soloist in the Romantic Festival programs. 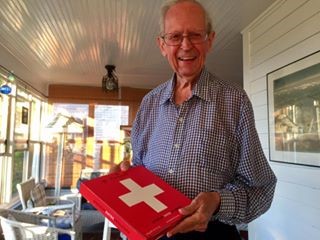 “Professor Aerne left every life he touched richer,” said Sheridan Stormes ’76, MM ’81, Associate Professor, Performing & Fine Arts Librarian. “He loved teaching and he loved his students but held them to the highest of standards. He was always impeccably dressed and his conduct was ever that of a gentleman. He was gentle and soft-spoken but also possessed of a sharp wit. He valued and devoted himself to all things beautiful, from exquisitely executed music and fine literature to delectable food and glorious gardens to rare antiques, Oriental rugs, and Clarice Cliff pottery. André Aerne was one of a kind and I think I speak for all who have been his students, colleagues, and friends when I say that his presence in our lives was a very special blessing.”

Aerne spent his early childhood near St. Gallen, Switzerland. His mother was a pianist and teacher, and after they moved to the Chicago area, Aerne studied voice with Hannah Butler, a well-known Chicago voice teacher.  In his pre-adolescent years, Aerne distinguished himself as a boy soprano, giving numerous concerts and recitals including performances as soloist with the Chicago Symphony and recitals in Kimball Hall.  He toured with the Apollo Boys Choir and later traveled with that group as an instructor.

Aerne earned the Bachelor of Arts Degree from the University of Chicago.  Afterwards he enrolled at the American Conservatory of Music in Chicago, where he earned Bachelor and Master of Music degrees in voice.  During the course of his career, Aerne was privileged to study with a number of notable musicians.  His private teachers included Rudolph Ganz (piano), Leo Sowerby (composition), Theodore Harrison (voice), Nadia Boulanger (music theory), Gerard Souzay (voice), Pierre Bernac (voice), and Margaret Harshaw (voice).

From 1956-1966, he was on the faculty of Shenandoah Conservatory of Music in Winchester, Virginia.