Two Butler alumni and the organizations they run have teamed up to create a nationwide fundraiser that will pit 64 charities in a bracket-style fundraising tournament. 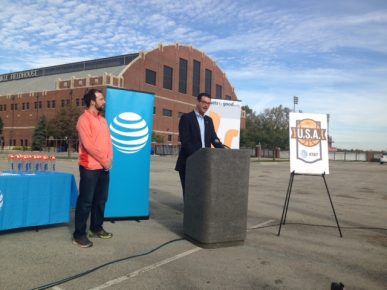 Matt McIntyre ’06, Executive Director and Co-Founder of Brackets for Good, and Bill Soards ’96, President of AT&T Indiana, made the announcement outside Hinkle Fieldhouse on Tuesday, October 11, of the first national Brackets for Good USA tournament.

“We talk about the Butler Way a lot, and I think it’s on the court and off the court,” McIntyre said. “I think we’re doing great things for a great community that we stayed in and love and want to support. And we’ve now put it on a national stage.”

Soards added: “It’s the kind of excitement that Butler basketball has brought to its fan base over the last few years that Brackets for Good and AT&T hope to replicate to benefit non-profits across the country.”

The city competitions have raised $2.75 million so far, McIntyre said.

In March 2017, Brackets for Good will again hold 11 city-based tournaments, but it will add the national competition. The deadline for non-profits to register is October 28 at bfg.org. Brackets for Good will validate the 501c3 non-profit status for each group, then work with Indiana University’s School of Public and Environmental Affair to evaluate which organizations make the tournament and how they are seeded in the competition.

The national winner will receive an addition $100,000 contribution from AT&T.

Next March, 768 non-profits will participate locally or nationally in Brackets for Good. McIntyre said all will gain new public awareness, raise funds, have the opportunity to use free tech tools, and engage supporters.

“It’s going to be an amazing March on the philanthropy court,” McIntyre said.