Future Farmers Get a Look at Butler’s Campus Farm

On a brisk fall Indiana Friday morning, 49 members of FFA (Future Farmers of America) got a look at a model for the future of urban agriculture.

The FFA members, who came from as far away as Massachusetts and Connecticut, Arizona and Washington state to attend the annual FFA convention in Indianapolis, took a tour of the CUE Farm at Butler to see how the University is approaching sustainable, environmentally responsible urban farming. 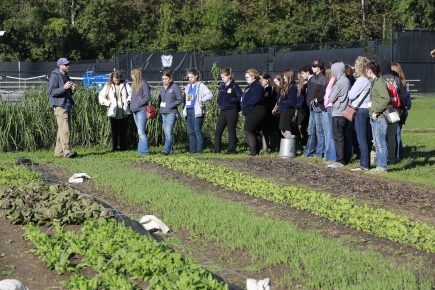 Tim Dorsey leads FFA members on a tour of the campus farm.

“Small-scale sustainable agriculture can be a part of our food system,” Farm Manager Tim Dorsey told the group, showing them around the one-acre parcel west of campus where approximately 75 different kinds of fruits, vegetables, nuts, and plants are grown. “People want to start connecting to the places where their food is grown.”

The produce grown on the farm is sold locally through a CSA group (Community Supported Agriculture), at a weekly farmstand, and to 6-10 local restaurants and grocery stores.

“Butler doesn’t have an agriculture major or degree,” Center for Urban Ecology Director Julia Angstmann told the group. “But students can participate in the environmental, social and business component of the operation.”

Butler students can take a class called Cultivating Well Being, where they work on the farm. Biology, Communications, and Business classes, as well as interns, also participate in farm activities.

For many of the FFA visitors, the Butler farm is a postage stamp of land compared with where they live. Katherine Carpenter—Miss Washington Teen Agriculture—lives on roughly 150 acres where they grow oats, timothy, alfalfa, grass, pasture mix and other kinds of hay that thrive in Washington State.

She wanted to see the farm at least in part because “it’s at a college and we’re all in high school and looking at colleges.” She said she liked what she saw.

“It’s really cool,” she said. “I enjoyed looking at it and listening to the talk. The way they work with the bees and things like that was interesting.”

Sydney Riebold, also from Deer Park, Washington, whose family raises steer, hogs, pigs, and sheep on their farm, said the campus farm is “not my thing, but I think it was good and it was interesting.”

After the tour, Angstmann polled the group and found that only one member had visited an urban farm prior to this tour and two had previously seen a sustainable agriculture project.

“I think,” she said, “it may have been an eye-opening experience for many of the attendees.”