Butler University’s first ever Mock Mediation team had quite a showing at the Brenau Invitational Mediation Tournament in Gainesville, Georgia, on October 7 and 8. 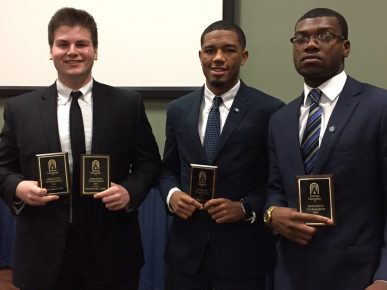 Each round in the tournament involved students serving as a plaintiff, a defendant, attorneys for both, and two mediators. Students rotated roles, serving as co-mediator in one round.

Teams were given general facts of a legal case, and then confidential facts for each side were handed out. The mediators’ job was to get the parties to negotiate a settlement in 90 minutes. Local lawyers from Northeast Georgia volunteered to serve as judges and provide feedback directly to the students after each round.

Prelaw advisor Jim McKneight served as the coach for the team, which practiced this fall with him and Jerry Pitt, who is a College of Business Career Mentor and veteran mediation trainer. McKneight said he was proud of the team’s success.

“Our goals were to have fun, compete with passion, and represent Butler in a first-class way,” McKneight said. “This team certainly did that. The tournament environment was similar to a law school Socratic method style class, so it will serve these students well in their future law school careers.”

This experience will certainly benefit these students moving forward.

Nick Fox is a risk management and insurance double major with a prelaw minor. He said that being on the team will give him an advantage when applying to law school.

“I was already 100 percent set on law school and participating on this team has given me some important experience that will give me a leg up as I go into law school in a few years,” he said.

McKneight and the students said they hope to make this an annual event.

Anthony Murdock said the tournament was affirmation that he was making the right decision in applying for law school following graduation. He also took away some lessons that will serve him well no matter where his future takes him.

“Conflict resolution is so important, and the ability to listen is even more crucial to success,” Murdock said. “Mediation teaches us how to do both things, so it was rewarding to be a part of the team.”