Professor McGrath Finds the Intersection of Theology and Science Fiction

Professor of Religion James F. McGrath is both a New Testament scholar and a science fiction fan, and over the years he has noted the frequency with which they tell a similar story. 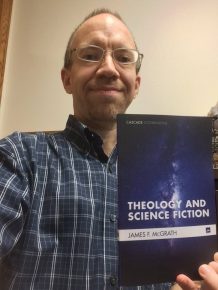 In his new book, Theology and Science Fiction, McGrath documents some of the parallels in the big questions they both ask, such as: What makes us human? Where did everything come from? What awaits us in the future? What do we dare to hope for?

“When I first started dabbling in this area, people seemed surprised that anyone would connect religion and science fiction,” McGrath said. “And sometimes I still deal with that. But more and more people are treating as a given that science fiction deals with these kinds of questions. So it’s a great time to be working on it.”

McGrath notes, for example, that certain translations of the Bible often mention aliens—using it in the sense of strangers or foreigners. “But I thought it would be interesting,” he said, “to take this and say, ‘What happens if you take this and see how it applies to the aliens in the sci-fi sense? How antiquated do these texts seem in relation to some of the things imagined in sci-fi? How much does science fiction, in talking about aliens, show itself to actually be concerned with how we treat foreigners?’”

The book is part of the Cascade Companions series, which are short texts designed to give an introduction to a subject and do it as succinctly as possible without being superficial. Theology and Science Fiction is 113 pages—six chapters of analysis and a final chapter featuring three short original science fiction stores that McGrath wrote.

McGrath said the idea for a book began to take shape when he came to Butler in 2003 and was asked to teach a humanities colloquium on Religion and Science Fiction.

“Whenever I’ve done things like that in teaching, I’ve always tried to find ways to do some research in the area,” he said. “I always like it to be something I’ve dived into more deeply.”