Butler’s Center for Citizenship and Community (CCC) celebrates its 20th anniversary on November 30 at 4:00 PM in Jordan Hall 109, and among the achievements the CCC will be reflecting on is the widespread impact it’s had on the city of Indianapolis, the University, and, especially, Butler students.

The CCC is responsible for creating the Indianapolis Community Requirement (ICR), which requires students to take one course in any part of the University that involves active engagement with the Indianapolis community. In 2015-2016, Butler students gave more than 25,000 hours of time, which translates to about $600,000 in value. 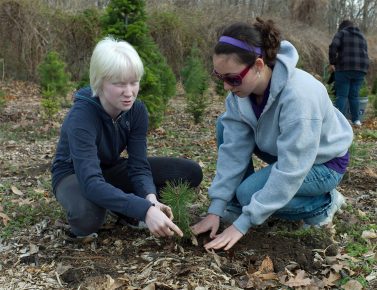 “I’m not sure money captures the reciprocal learning value of the ICR, though,” said Donald Braid, who has been the CCC Director since 2007. “The work students do in ICR classes has helped address needs in Indianapolis communities, and it helps the students understand their own role in the community.”

In addition, Braid said, thanks to the ICR, “community engagement is woven into the fabric of the institution. All students participate, so that embeds in our core curriculum the civic goals that are part of a liberal education and Butler’s founding principles.”

Beyond the ICR, the CCC also has helped facilitate projects that involve campus-community partnerships. This year, for example, the center is helping lead a major research project, “Music First,” which will use music to attempt to ease the suffering of Alzheimer’s patients. It also has supported Education Professor Katie Brooks, who secured a $2 million grant to alleviate the shortage of English as a New Language teachers. And the center has sponsored educational programs like leading a campus-wide discussion on civil discourse.

But Braid said the most significant impact the CCC has had may be on individual students who have gone into the community thinking they were simply doing volunteer work and instead found that they were learning about themselves and getting back even more than they were giving.

When Kate Richards ’18 came to Butler from Effingham, Illinois, she knew a little about the ICR and Butler’s focus on service learning. But the idea of communicating with the Indianapolis community was something that appealed to her.

During her first American Sign Language class, she did her service learning at Miller’s Merry Manor, a nursing home and rehabilitation center, where she and another student played cards and talked with three or four deaf residents using sign language. In her third ASL class, she was assigned to the Indiana School for the Deaf, where she tutored middle-school students in math.

Richards, a Communication Sciences and Disorders major, has now completed four ICR courses and works for the CCC as a liaison between the Deaf School and students at Butler. In that role, she places students where they’ll have the best experience.

“Students know about the ICR,” she said. “But they don’t realize how much of an experience it is. I think that’s what the CCC is trying to get at—it’s much more than everyone thinks it’s going to be.”

The CCC began through a grant from Eli Lilly & Co. in 1996 with Political Science Professor Margaret Brabant as its first director. The center’s creation was an outgrowth of Butler’s role as a founding member of Indiana Campus Compact, an organization of Indiana universities that got together to recognize the value of civic engagement and the responsibility of universities to make connections with their communities.

Early on, Brabant pursued Community Outreach Partnerships Centers grants from the federal Department of Housing and Urban Development. The grants help colleges and universities apply their human, intellectual, and institutional resources to the challenge of revitalizing distressed communities.

Those grants, along with funding from the Nina Mason Pulliam Charitable Trust and other local foundations, launched the CCC, which initially focused on service learning, community revitalization, fair-housing, and crime and safety issues. 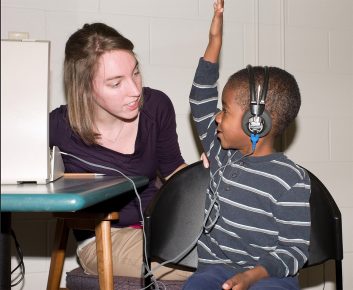 “A lot of that work was valuable, and some portions didn’t fit Butler’s mission,” Braid said. “Over the years, we’ve learned which pieces really fit the university’s educational mission, which partnerships really are valuable reciprocally in supporting the education of our students and in supporting community issues, and we’ve focused on those things.”

The Indianapolis Community Requirement is one of those pieces that stayed. The CCC set up partnerships with community organizations, many of which continue to this day. The relationship with the Indiana School for the Blind and Visually Impaired (ISBVI) is one.

Luke Schaible ’17, an Accounting major from Findlay, Ohio, began his service learning experience at ISBVI when he was a first-year student in Braid’s Making a Difference in the World course.

“I was pretty new to the whole concept of service and I had no idea what to expect,” he said. “I thought it was something you did for a requirement in college because you had to, and I didn’t know what I was going to gain. But talking to the students there really changed my view.”

When he first got there, he sat in a corner—“just being my shy self”—when a student came up and asked him to play basketball.

“It’s nice to go into their world for a few hours and see how ISBVI students are with their peers,” said Schaible, who now works for the CCC, guiding students to ISBVI to make sure they have the kind of experience he had. “You see that ISBVI students are just like you and me. That’s what’s so intriguing.”

Braid said the experiences Richards and Schaible have had are exactly what makes the CCC important to Butler.

“We’re interested in empathy, community, and service, which are what we think are an essential part of an education, and with students coming through a liberal arts university, we hope to generate an understanding and a practice of those kinds of values and virtues,” he said.

“The kind of educational process we promote is experiential on one hand, which is more than just doing in the community; it’s learning to value the community, it’s learning to understand others, to understand and appreciate diversity. In a way, this could be seen as an experiential education for the liberal arts. Anything that falls within that domain are things the center is interested in supporting.”