The Center for High Achievement and Scholarly Engagement (CHASE) announced the winner of the 2016-17 Hendricks Fellowship, which is awarded to a student who completes a scientific research project in the area of conservation or Indiana ecosystems.

The inaugural 2016-17 Hendricks Fellowship has been awarded to junior Jacob Reeves for his project studying how wildlife use Butler University’s campus as their home. 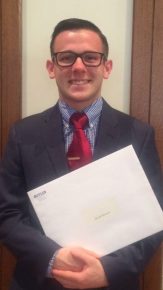 Reeves, a Biology major with minors in Chemistry and Mathematics, used his passion and interest in the outdoors as the fuel behind his winning research project, the Butler Wildlife Watch. Reeves’s research will allow him to identify the regions and habitats on campus that are most valuable to wildlife through the use of motion triggered wildlife cameras.

The goal of the study is to increase knowledge of what areas on campus need to be conserved the most while also keeping in mind campus’s future development plans.

“This [project] becomes increasingly important with our current push for expansion, so that we can design facilities with the conservation of wildlife in mind,” he said.

Reeves said he got his inspiration for the project from Indy Wildlife Watch, where he is an intern. Indy Wildlife Watch’s program was created to measure wildlife conservation through the greater Indianapolis area. Reeves has been working on his project for just under a year with professors Carmen Salsbury and Travis Ryan, and Julia Angstmann, the Director of Butler’s Center for Urban Ecology, who serves as his faculty mentor.

Reeves said the Fellowship will provide him with the funds for all the equipment necessary to complete his research as well as to attend research conferences. He plans to present his results at the Butler Undergraduate Research Conference as well as the Indiana Academy of Sciences Conference in 2018.

Reeves is more than grateful for the opportunity he was given through the generosity of Dr. Hendricks. The fund is administered by the Center for High Achievement and Scholalry Engagement (CHASE). According to the CHASE website, applications for the next Hendricks Fellow will open in September 2017.

“Too few are the people willing to give toward the furthering of our knowledge of the world we live in—especially directly to conservation efforts,” Reeves said. “It truly restores my faith in our world to know that there are generous people who believe in this cause as wholeheartedly as I do, and who are willing to fund projects like mine.”