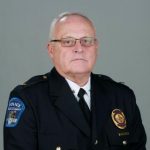 Conley joined the Butler University Police Department two years ago, after working with the Indianapolis Metropolitan Police Department (IMPD) for 40 years in various positions in Operations, Investigations, and Administration. He served as Homeland Security Supervisor for IMPD, coordinating stadium security for Super Bowl XLVI, and also was District Commander and Deputy Chief of Operations.

Conley is a graduate of the FBI National Academy. He is a former Indianapolis Police Department Police Officer of the Year, a recipient of the American Legion Spartan Award for Valor, and a recipient of the Webber Seavey Award from the International Association of Chiefs of Police, presented by Attorney General Janet Reno, for Community Policing Excellence.