Associate Professor Kelli Esteves, who has taught in the College of Education since 2010, has been named the Richard W. Guyer Chair in Education. 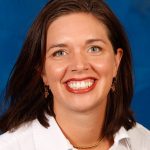 “It is a true honor to be awarded the Richard W. Guyer Chair, especially when considering how much admiration I have for previous recipients such as Arthur Hochman, Catherine Pangan, Shelly Furuness, Debbie Corpus, and Tom Keller,” she said. “Dean Ena Shelley and so many of my College of Education colleagues have been instrumental in helping me reach my professional goals. I am grateful to work with people across the University who are incredibly kind, intelligent, passionate, and hard working.”

Before joining the Butler faculty, Esteves taught as an Assistant Professor of Education at Aquinas College. She also has taught in the Rockford (Michigan) public schools as a special education teacher.

Esteves earned her bachelor’s degree from Hope College and her Master of Arts and Doctor of Education from Western Michigan University. Her areas of expertise are inclusive practices, response to intervention, children’s literature, and developmental theory.

The chair is named for Richard W. Guyer, a native of Indiana, who received his B.S. in education from Butler in 1948, an M.S. in 1950, and an Ed.S. in 1967 from the University. He received his Ed.D. from Ball State University in 1969. A World War II veteran, Guyer began his career in education as a teacher and head football coach at Crawfordsville, Indianapolis Howe, and Franklin Central high schools. He later served as athletic director, vice principal and principal at Franklin Central.

Guyer served as an adjunct faculty member at Butler for several years before becoming a full-time faculty member in 1968. He taught undergraduate and graduate courses in administration and also served as the director of student teaching and field experiences, director of educational placement and director of undergraduate studies for the College of Education. He retired from Butler in 1986 and enjoyed professor emeritus status until his death in 2000.

The Richard W. Guyer Professorship in Education was established in 1997 by D. Michael Hockett, a 1964 graduate of Butler University and an Indianapolis businessman who was deeply influenced by Guyer’s teaching and guidance.