Victoria Kreyden ’17, a biology/Spanish double-major from Carmel, Indiana, has won first prize in the undergraduate poster session at the 2016 American Society for Cell Biology (ASCB) meeting in San Francisco, California, for her poster presentation “Investigation of the neuronal functions of the SUMO conjugating enzyme UBC-9 at the C. elegans neuromuscular junction.” 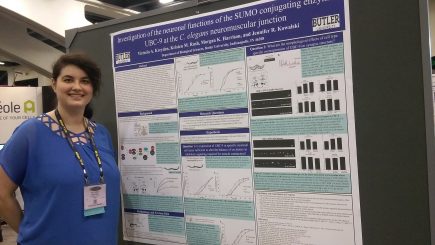 Victoria Kreyden and her prize-winning poster.

Kreyden’s presentation on December 3 was judged best of more than 100 by undergraduates from around the country and abroad.

Kreyden is studying the C. elegans—microscopic roundworms—to learn more about the human nervous system. Associate Professor of Biology Jennifer Kowalski said Kreyden is investigating a particular set of enzymes, called SUMO enzymes, that control the activity of numerous proteins in neurons and other types of cells.

“Victoria is trying to determine the role of these enzymes in regulating neuronal signaling, which is critical for nervous system function,” Kowalski said. “Because of the similarities between the human and C. elegans nervous systems and the high number of genes they share, including the genes encoding SUMO enzymes, it is likely that what she learns in the worms will be relevant to understanding human nervous system function.”

Kowalski and Assistant Professor of Biology Lindsay Lewellyn accompanied Kreyden and three other Butler students who also presented their research at the 2016 ASCB meeting:

-Ashley Kline – “Characterizing a Role for the Misshapen Kinase in the Growth of the Germline Ring Canals in the Developing Egg Chamber.”

-Olivia Crowe – “Determination of the role of Dreadlocks (Dock) in the growth of the germline ring canals in the developing Drosophila melanogaster egg chamber.”

-Lauryn Campagnoli – “Investigation of SYD-2 as a potential substrate of the Anaphase Promoting Complex in promoting GABA release at the C. elegans neuromuscular junction.”