The curtain rose December 7 on the new Butler University Theatre Department Scene Shop, which has moved from cramped quarters in the basement of the Holcomb Building to much larger, well-ventilated space in the west side of the Sunset Avenue Parking Garage. 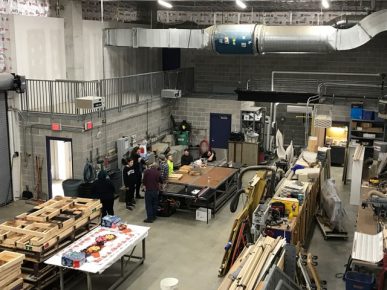 Half the space will be used to build scenery for Theatre productions; the other half will be used for costume storage for the Theatre and Dance departments.

At a brief ribbon-cutting ceremony, members of both departments said they couldn’t be happier.

“It’s like moving out of a house built in the ‘50s with no closet space into a house with walk-in closets,” Larry Attaway, Chair of the Dance Department, said.

“Such a significant upgrade,” said Michelle Jarvis, interim Dean of the Jordan College of the Arts.

“The scene shop was a small, crowded space in Holcomb, and this is way, way, way, way better,” Theatre Professor Wendy Meaden said.

The 40×80 scene shop and 40×40 storage spaces for both ballet and theatre costumes (which had been located in a pole barn behind Hinkle Fieldhouse) gives students and staff closer proximity to the Lilly Hall Studio Theatre, the Schrott Center for the Arts and Clowes Memorial Hall, where performances are held. It means that Glen Thoreson, the Scene Shop Supervisor and Technical Director, and crew have space with lots of natural light, a 25-foot-high ceiling, and improved air flow to build and paint sets, and they also have a garage door for easy access and exit to move sets.

In addition, costumes that once were often damp or damaged in storage are now kept in a climate-controlled facility. Both Theatre and Dance have more than 10,000 pieces in the new space.

“There’s so much more room to move and work,” Meaden said.

At the ribbon-cutting ceremony, Department of Theatre Chair Diane Timmerman said the scene shop had been in various locations over the years, including under the old Hilton U. Brown Theatre west of Hinkle Fieldhouse.

She thanked the administration and Board of Trustees for approving funds to make the new space possible, and she acknowledged the efforts of past faculty, staff, and administrators who worked to secure better space for the scene shop.

“We’re standing on the shoulders of the people who came before us,” Timmerman said.

“We’re so grateful for everything that was done to make this happen,” Attaway added.