Sigma Gamma Rho Endows a Scholarship for a COE Student

Sigma Gamma Rho, the sorority founded at Butler University on November 12, 1922, has given Butler a gift to establish the Sigma Gamma Rho Sorority Inc. 7 Founders Endowed Scholarship to honor the seven education majors and public school teachers who started the organization. 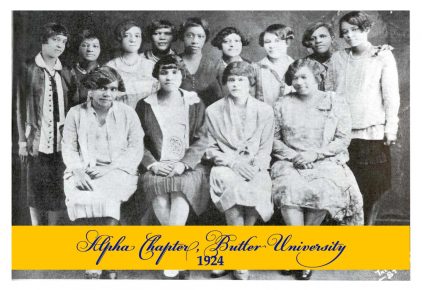 The scholarship will be awarded annually beginning next fall to a student enrolled in the College of Education.

Bonita M. Herring, the Immediate Past Grand Basileus (International President of Sigma Gamma Rho Sorority Inc.), who implemented the project during her time in office, said the goal is “to uplift students in education and honor the legacy of seven visionary women on the campus of Butler University who shared a commitment to education and sisterhood.”

“We acknowledge these courageous women through this gift in preparation for the coming Centennial Celebration of Sigma Gamma Rho Sorority,” she said.

Sigma Gamma Rho has more than 85,000 members in more than 500 chapters across the United States, the Bahamas, Bermuda, the U.S. Virgin Islands, Canada, Germany and Korea.

“We’re thrilled to have this scholarship to award, given the history of Sigma Gamma Rho at Butler,” said Jaci Thiede, Butler’s Vice President of Advancement.