Dr. Pangan’s Class Gets Its Hands on Moon Rocks

During six lunar missions, American astronauts brought back a total of 382 kilograms (about 842 pounds) of rocks from the moon. On Tuesday, January 31, some of them were on display in College of Education Professor Catherine Pangan’s Science and Social Studies Methods class.

The moon rock samples, with names like breccia, basalt, and anorthosite, came sealed in round, clear Plexiglas disks about six inches in diameter. They were brought to the class by NASA Education Specialist Susan Kohler, along with a message to the 26 future K-6 science and social studies teachers in the room: You too can borrow moon rocks to show to your students. 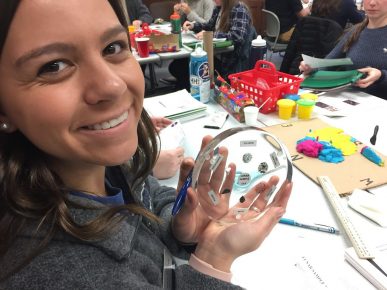 “It’s not really well known that we do this,” said Kohler, who didn’t know NASA had a loaner program until she got her job seven years ago. “But I will say this: I have no open dates on my calendar for the rest of the year.”

NASA actually has been lending moon rocks for decades. Pangan said in the 1980s, her mom—a seventh-grade science teacher—borrowed some for her class.

“It left such an impression on me,” Pangan said. “We had a security guard outside our house, my mom had to put the lunar samples in a safe at the bank, and she had a band on her arm that was hooked to the briefcase that held the rocks. We got to see the samples up close and personal.”

In Tuesday’s class, Kohler spent several hours presenting space-related lessons the students can replicate in their classrooms as well as training them in how to request to borrow sample disks containing moon rocks. 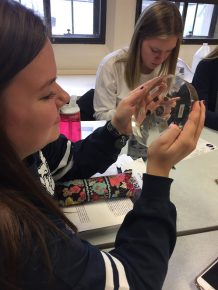 As Pangan’s class discovered, teachers go through a multi-step process to obtain what’s known as “Lunar Handling Certification—forms to fill out, security precautions that must be taken, and more.

As Kohler reminded the Butler students repeatedly: These rocks are irreplaceable.

But getting the rocks into classrooms is well worth the effort, said Matt Mackowiak, a senior from South Bend, Indiana. He was excited to see the rocks for himself—“Oh, my gosh, yes. You have no idea”—and to get them for the students at the Butler Lab School, where he student-teaches fifth and sixth grade.

“Our next unit is space, and any time you bring up space in the classroom, all the kids are engaged and they’re really looking forward to it,” he said. “What I got from here, I will take—all the information and the packets I got—and immediately use and probably present it similarly to the way we did it here.”

Pangan said this is the first time she’s done anything like this with her students in this class. It will happen again.

“This was really hands on and in-depth science, and that’s exactly what we hope to see in elementary classrooms from early learners pre-K through sixth grade,” she said. “This fits our philosophy of active engagement really well and asking the why. It’s not just the flash of having moon rocks but talking about how they got there, how they ended up on our planet, and talking about the people behind this.”