Butler Newsroom > Butler Home Page > Home Feature News > MFA Students Promote the Healing Power of Writing
Butler to Select a New Fraternity Would You Give a Kidney to a Facebook Friend? She Did.

Leona, a woman beyond a certain age, likes to break out in song. Doesn’t matter where she is or who’s in the room or that it’s well after Christmas and she’s still singing “Silent Night.” She’s going to sing.

At this moment, she’s sitting in a conference room at American Village retirement community, explaining herself between song bursts to Stephanie Anderson, a student in Butler’s Master of Fine Arts in Creative Writing program. Every Tuesday, Anderson and three other MFA students visit Leona and others at American Village to hear their stories and get them down on paper. 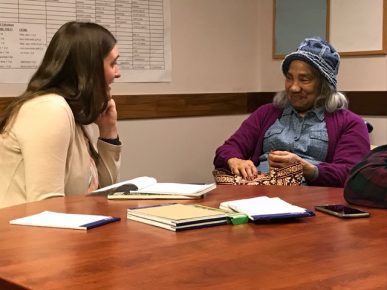 “Leona feels happiest when she is among her 10 children,” she writes. “She loves to sing a lot too, and this is a gift she shares with her children, especially since it’s a God-given talent. She loves singing in a choir and sharing the community, because God knows when she is happy and sad, and he projects his goodness through her. Leona knows we have to choose happiness. Words cannot describe the joy she feels being with her family, the one at home, and the one at church.

“Sometimes she is so glad to be alive that she bursts into song, being so glad for her life and her gift. She used to teach singing and sometimes she would sing those songs to her children when they felt lonely or sad, particularly ‘Amazing Grace.’ Leona believes firmly in love and laughter and compassion, and believes harder in the power of beautiful love. She doesn’t want to be evil and frowning. She wants to kill sadness with joy. She sings when she is sad and when she is happy, because the voice is the soul coming to the light.”

Sometime later, Anderson reflects on what happens in these sessions.

“We’re making a difference in these people’s lives,” she says. “We’re getting to know each other. We’re making friends. We’re showing ourselves and each other that it’s a big world we live in, but in this circle there’s joy, there’s happiness, there’s laughter. This is marvelous.”

This is Writing for Wellness, a program that MFA students began two years ago to use writing for therapy, for recollection, for relief, for fun. The first classes took place at Eskenazi Health in Indianapolis, where the MFA students worked with hospital staff who needed an opportunity to relax and unload.

Since then, Writing for Wellness has expanded—to Riley Hospital for Children, Indiana Women’s Prison, Hope Academy (a high school for students recovering from addiction), and Indiana Youth Group (an  organization for LGBT youth). The program is soon to add sessions for breast-cancer survivors.

The idea to bring Writing for Wellness to Butler started with Hilene Flanzbaum, the Director of the MFA program. Flanzbaum has taught creative writing on the undergraduate and graduate levels, and her husband, Geoffrey Sharpless, runs the summer creative writing camp at Butler and teaches creative writing at Park Tudor School. They often talk about the psychological benefits of that work, how the participants seem happier when they’re getting a chance to express themselves.

Flanzbaum thought that idea could be incorporated in the MFA program. And since one of the program’s missions is to provide service, Writing for Wellness seemed like a natural fit.

“It’s a discipline that’s fairly well established in other places but had no footprints at all in Indiana or Indianapolis,” Flanzbaum says. “So I saw a real opportunity for our students.”

Around the same time, Flanzbaum was recruiting a new MFA student, Bailey Merlin, who had taught in a Writing for Wellness program as an undergraduate at Berry College in Rome, Georgia.

“When we talked on the phone,” Merlin says, “I told her what I did: I bring everyone in, I have people write, they come to conclusions on their own, and it’s pretty fascinating. She’s like, ‘That’s exactly what we want.’”

That led Merlin to choose Butler for her MFA, and she led the MFA program’s first Writing for Wellness group that went to Eskenazi. There, she says, they saw staff members “writing about things they’d never expressed before and crying.” At Riley Hospital, she worked in a behavioral unit with kids suffering from eating disorders and depression.

“To see the spark of life go back into them is just amazing,” she says.

The spark works both ways.

“You would be amazed how much doing this changes you as a person,” Merlin says. “Just to see how you directly affect someone else. You don’t get that opportunity a lot.”

The MFA students who facilitate the program all seem to have that reaction. Tristan Durst has spent her Tuesday afternoons writing with a retiree named Robert, who was part of a 1950s Indianapolis-based doo-wop group called The Counts. The first week, she says, he told the same stories several times.

“Now, he’s remembering more, and more of his personality is coming out,” she says. “And this week, he was cracking jokes left, right and center. He was telling me about his brothers playing baseball and he said, ‘I won’t say that I was the best baseball player. I could, but I won’t.’ He started slipping in jokes, and I’m getting a real sense that he enjoys being there.”

Taylor Lewandowski, the MFA student who’s leading the group at the senior center, says he and the other Butler students are needed there. He tells the story of a woman he’s worked with named Martha.

“Her roommate passed away, and she saw her last breath,” Lewandowski says. “That obviously affected her. She came in three days after that and I worked with her. Afterward, she said, ‘That was really good for me. It was good for me to get out and talk to someone.’ Writing for Wellness creates this community that’s really nice. It’s really a service. We’re there to be there for them and once you realize that, it’s really nice. We’re actually doing something good.”