To receive the award, she completed over 400 community service hours, spent 200 hours practicing the clarinet and 200 hours improving her tennis skills. 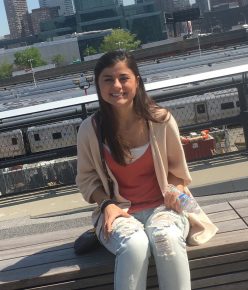 To receive this award, Ciulla completed over 400 community service hours, spent 200 hours developing musical skills practicing advanced clarinet pieces, and devoted over 200 hours to physical fitness improving her tennis skills. She fulfilled the exploration component—which has to be at least four overnight days—with a trip to India.

That’s close to 1,000 hours—or over 41 days—of self and community betterment.

“I knew it would be a lot of work, but I enjoyed the challenge of maintaining focus in four different areas,” Ciulla said with a laugh. “It’s been a big part of my life for a while now.”

Earning the award fulfilled Ciulla’s six-year dream. As a 14-year-old, Ciulla was attracted to the program’s well-rounded nature. She enjoyed community service and was eager to get more involved, so she signed up.

Well-roundedness plus goal setting was right up Ciulla’s alley, according to Nancy Webster, Ciulla’s Congressional Award adviser in high school.

“She was very much a goal-setter, but always had time for friends,” Webster said. “Always had time to listen to a friend in need or got out with a group of kids and go to the movies. She wasn’t just all work and no play.”

Webster, Director of Admission at University High School of Indiana, met Ciulla when the now 20-year-old was in elementary school. Webster never served as Ciulla’s teacher, but she saw Ciulla…

-Go out for the soccer team when they needed more athletes.

-Set goals for herself in the classroom and science lab.

-Graciously spend a day with students interested in transferring to University High School.

“She did it,” Webster said, “not for herself, but for her team and her school and her friends. That’s what kind of person she is.”

As a Bulldog, Ciulla asked Jason Lantzer to be her mentor as she finished the program.

Lantzer, Professor and Assistant Director of the Butler University Honors Program, met Ciulla at a new student registration day in spring 2015. She then enrolled in his honors first-year seminar. After her freshman year, she took a summer class he taught. And she now serves on the student honors council, which he advises.

“She is a very serious student,” Lantzer said. “She is well-prepared, but that doesn’t mean she’s not willing and able to have fun and roll with the punches.”

Lantzer learned about the Congressional Award the day Ciulla asked him to be her advisor. Lantzer said he has learned through the process that it is rare for students to complete what they set out to do, especially to the Gold Medal level.

“So it shows a good deal of commitment on her part and determination to make sure it gets done,” Lantzer said. “Even with going from high school to college, she made sure she finished up and finished where she wanted to be, which is at the top.”

Once on campus, Ciulla became involved with Butler’s Timmy Global Health chapter and travelled to Guatemala in May 2016 with the group. There, while working in a lab, they were able to diagnose someone with diabetes following a blood test.

“It was serendipitous,” Ciulla said, “because they wouldn’t have ever known about their diagnosis until they developed complications. Working in a rural Guatemalan clinic was so different from anything I was used to, but it was very gratifying.”

In May, a group of 18 Butler students, including Ciulla, will return to Guatemala. Ciulla is the trip leader, a familiar job for her as she planned her family’s entire itinerary for their travels through India.

Looking back on all of her experiences, Ciulla said she is thankful for the program that pushed her to realize her dreams.

Way more than checking a box.

On the pre-med track now, Ciulla continues to serve at the Trinity Free Clinic, where she added up many of those 400 hours.

But even if the numbers were taken away, it would still feel the same for Ciulla. She said even though receiving the award is an end to an era, it’s not the end of the work and service.

“I wouldn’t feel the same if I just stopped,” Ciulla said. “I wouldn’t be me.”

And her supporters feel the same.