Owen Schaub: After 37 Years at Butler, the Curtain Closes

“Having been at Butler has been a very warm, rewarding and humane experience,” he says.

Owen Schaub accumulated a raft of memories during his 37 years as a Butler professor, but this one, from around 1990, stands out: After speaking at a luncheon for new students and their parents, a father plunked himself down next to Schaub and said, “You said you like being at Butler. What do you like about it?”

“I said,” Schaub recalled, “and I still think this is true, that at Butler, you’re allowed to try new things, to explore things for yourself, and people won’t make judgments about you because you’re going to do something that seems different from your discipline or your orientation. And that’s welcome.” 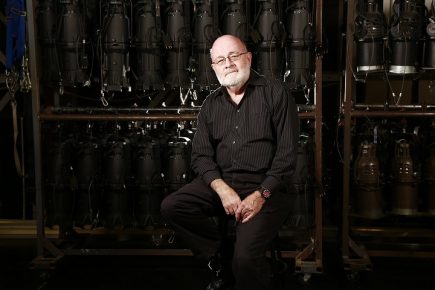 Owen Schaub has taught at Butler for half his life.

Schaub, 75, said that’s one of the many things he’ll miss about Butler when he retires at the end of this academic year.

He will also miss the students (“We’ve always attracted very nice young people who come from good family backgrounds and are sensible 18- to 22-year-olds”), his colleagues (“Everyone is very talented and qualified in the areas they work in, so we have a coherent and, I think, successful approach to theatre”), and the classes he’s taught in both theatre and the core curriculum.

He’s seen a lot of changes in personnel—five presidents, five deans in the College of Fine Arts, and five department chairs in the Theatre Department—and to the campus, and he’s especially thankful for the addition of the Schrott Center for the Arts. “We have needed a middle-sized, well-equipped theatre for a very long time. It is a joy that that’s here.”

In the Theatre Department, the soft-spoken Schaub is known for his encyclopedic knowledge of theatre history.

“One of us on faculty or a visiting guest artist will hear about some intricate detail from theatre history and share it with the group,” Theatre Chair Diane Timmerman said. “Invariably, Owen will launch into a richly nuanced description of the topic because he knows all about this time in theatre history. Whenever a guest lecturer says, ‘You probably will not have heard of this…,’ I always respond, ‘Well, one of us has.’ And I am always right about that.”

Schaub grew up in Massapequa, New York, son of a construction-equipment operator and licensed practical nurse, in a house where he could hear the Atlantic Ocean and was in proximity to New York City. He “stumbled” into theatre almost literally, when he saw a high school friend moving a lighting rig through the halls. Schaub helped him carry the lights and soon was involved in a production.

He went to Hofstra College (now Hofstra University) for his bachelor’s degree in theatre, graduating in 1963, and spent 2½ years in active duty in the Army, mostly in Germany. There, he met Heidi, the woman who would become his first wife. They had their first daughter there, then moved to Bloomington, Indiana, where Schaub earned his M.A. in Theatre.

He started his teaching career at the University of Hawaii (and Heidi gave birth to their second daughter in Honolulu), then moved on to Dalhousie University, Kent State—where he earned his doctorate in theatre—and Newberry College in South Carolina.

In 1980, he answered an ad seeking a Theatre Department Chair at Butler University. 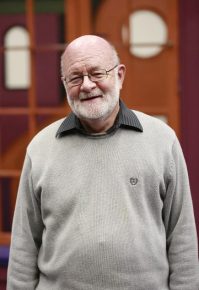 Schaub said that when he started, he wanted to be a good technical director and then a good scene designer—“and that’s what I did for a long time.” Timmerman said students from the past 15 years probably don’t know that Schaub worked in the design and tech part of Butler Theatre productions during his early years here. He designed lights for many productions and also designed and built sets.

“Given my graduate education, I’m doing exactly what I was prepared to do by getting an M.A. and then a Ph.D., even though there were times when I was still designing and being a technical director,” he said.

Schaub is proud of the students he’s taught, some of whom have gone on to be professors, lawyers, founders of theatre companies, and drama therapists.

Jim Senti ’05, who went on to earn his MFA at Harvard University and now is an actor in Los Angeles and professor at California State University, Northridge, calls Schaub “one of the most admirable characters in my life so far.” Senti remembers when Schaub cast him in a role in the Caryl Churchill play Vinegar Tom that featured a lengthy monologue. In rehearsal, Senti stumbled over the words. He went to the side afterwards, clearly frustrated.

“He came up to me,” Senti remembered, “and said, ‘This is what rehearsal is for. In a few weeks, this will be just a memory. You’re going to be great.’ And I remember him saying, ‘The stumbling now is necessary so we can stumble less later. So do the work now.’ That has stayed with me, not only as a professional actor, but just as a person.”

In 2006, Schaub wife, Heidi, died of breast cancer. A couple of years later, he met a woman named Donna McCleerey at a group bereavement session. They found out they had something in common—they both worked at Butler. (She is the administrative specialist for the men’s basketball team.) This year, they will have been married nine years.

When the school year ends, Schaub will have spent 47 years teaching in college and 60 years in the theatre. Both teaching and theatre will play a part in his retirement: He’s planning to continue writing an analysis of Hamlet that he started during a sabbatical in 2015.

Although he’s spent half his life in Indiana, Schaub said he’s “always sort of been a permanent New Yorker. I remain a New Yorker in my head.”

And a Bulldog at heart.

“What I like about Butler is that the people you come in contact with are genuine human beings who are working to do the best that they can in whatever job or assignment that they have,” he said. “There’s little in the way of selfishness or ego or self-importance. Having been at Butler has been a very warm, rewarding and humane experience.”