Butler University is taking part in a pilot inclusion program that brings a Special Olympics athlete to campus to audit a semester-long class.

Andrew Peterson is a talented long distance runner. He is a former Special Olympics Games gold medalist who is currently training to qualify for the Boston Marathon.

And he’s also a catalyst for inclusion of people with disabilities on Butler University’s campus. 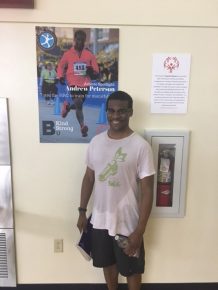 Peterson is a decorated Special Olympics athlete who was identified as a student with an intellectual disability during his schooling.

He has been selected to be a part of a pilot inclusion program being offered through a new partnership with the Recreation Department, the College of Education, and Special Olympics Indiana.

The program brings a Special Olympics athlete to campus to have them audit a class for the semester. This means that the athlete can be fully immersed in the class without receiving a grade or course credit.

Peterson is auditing a Track Physical Education class this semester at the Health and Recreation Complex (HRC), PE207.

His mentor is Erin Garriott, an instructor in the Multilingual and Exceptional Learners program. She said the goal of this new program is two-fold.

“We want to empower our BU students to fight for inclusion, now and in their future,” Garriott said. “We believe we can do that by giving them the opportunity to have meaningful experiences with people with disabilities, so they have a sense of who they are fighting for. The other side of our goal is to give Andrew a sense of inclusion.”

She said Andrew is getting practice in new social situations, which can be difficult to teach because there are so many unwritten social norms. He is also learning to navigate the HRC, a space that was unfamiliar to him before coming to campus.

“From my perspective, I think meeting Andrew has challenged some of the students to question their own beliefs about ability,” Garriott said. “It only took one class before a student came up and asked questions about Andrew. He said, ‘tell me a little more about Andrew. I’m just so interested.’ I think curiosity leads to understanding.”

Garriott hopes to continue to grow these inclusion programs so that more Butler students have the opportunity to learn from people of all abilities. After the spring semester is over, the pilot program will be evaluated in hopes of bringing more Special Olympics athletes to campus in the coming semesters.

This month, Butler will be hosting its first Special Olympics event on campus called the Athlete Leadership Program (ALP). Around 75 athletes and their mentors will be on campus taking classes and learning how to be leaders.

With these programs and many others in the works, Butler is well on its way to true inclusion on campus.

“I truly believe that experiences can shift our beliefs, which can change our behaviors,” Garriott said. “Hopefully these experiences stay with students as they transition to jobs and life off campus.”