Madison Sauerteig, a junior from Arcadia, Indiana, who has done extensive volunteer work with Riley Hospital for Children, is the recipient of the 2017 John Weidner Endowed Scholarship for Altruism.

The Student Sociology & Criminology Association (SSCA), which selects the recipient for this scholarship each year, said Sauerteig was selected based on the quality of her application, extent of service and volunteer work, letter of recommendation, and connection to John Weidner’s mission. 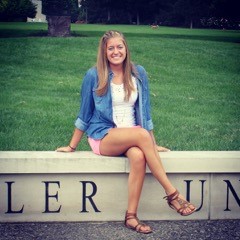 “Madison submitted an outstanding application,” SSCA faculty adviser Jess Butler said. “Her volunteer work with Riley Hospital for Children includes weekly visits to the hospital and two years of service on the Riley Relations committee for Butler University Dance Marathon, an annual event that benefits the hospital. We are proud to select a student as deserving as Madison for this honor.”

In her essay for the scholarship, Sauerteig wrote about the healing power of service to others and how working with children at the hospital has transformed her own life. In addition to her work at Riley, she has also volunteered with the US Dream Academy, Bulldogs Into the Streets, Food Recovery Network, and Common Ground Church.

Sauerteig is majoring in Psychology and Sociology with a Specialization in Social Work and Social Policy. She received the award at the College of Liberal Arts and Sciences’ Awards Day on Saturday, April 8.

The award she is receiving is named for John Weidner, a Dutch citizen and Seventh Day Adventist who, during World War II, saved the lives of about 1,000 British and American downed airmen, Jews, Dutch, Belgians and French fleeing Nazi persecution. Weidner was honored by five governments after the war and by the Holocaust Museum at its opening in 1993. After he died in Los Angeles in 1994, his widow, Naomi, started a foundation for honoring the altruistic spirit.