Six former student-athletes, two teams and a long-time supporter of the athletics program have been chosen for induction into the Butler University Athletics Hall of Fame. The 2017 Hall of Fame class will be formally inducted at a dinner/ceremony on the Butler campus Sept. 15.

“We are proud to welcome this exceptional group of individuals and teams to the Butler University Athletics Hall of Fame,” said Butler Vice President/Director of Athletics Barry Collier. “Their accomplishments inspired many and provided a platform to showcase The Butler Way.”

The Butler Hall of Fame was created in 1991 to provide a forum in which those who have brought honor and respect to Butler University and its athletic program could be acknowledged and permanently enshrined in Hinkle Fieldhouse. Inductees have made exceptional contributions to the prestige of the University in the field of athletics, and continued to demonstrate in their lives the values imparted by athletics. The 2017 Class will bring the membership of the Butler Hall of Fame to 207 individuals and 11 teams.

Bartolomeo spent 13 years at Butler as a student-athlete, assistant coach and head coach. He was a three-year letterwinner with the Bulldogs as a player. During his tenure, Bartolomeo would help guide Butler to a 98-40-4 overall record that included 10 conference titles and three NCAA Division II playoff berths. He continued his coaching career at the University of Indianapolis where he went 72-30-1 as a head coach. The three-time GLVC Coach of the Year would also spend 11 seasons as an assistant coach at Ball State.

After becoming Butler’s first honorable mention AVCA All-American in 2003, Bienemy repeated the honor by becoming the first two-time honorable mention All-American in 2004. Bienemy, a two-time AVCA Midwest All-Region selection and two-time All-Horizon League honoree, finished the 2004 season with averages of 3.89 kills, 1.28 blocks and 1.23 digs per game while hitting .242 on the season. She finished her BU career ranked seventh in career blocks and 10th in kills. In Bienemy’s two All-American seasons, the Bulldogs posted a 38-22 overall record and a 21-7 mark in league play. 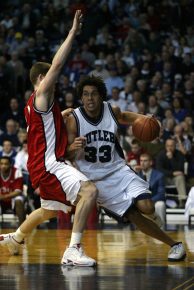 Cornette led Butler to three NCAA Tournament appearances and one trip to the NIT during his collegiate career. He was recognized as the Co-MVP of the 2002-03 team that finished 27-6, won the Horizon League regular season championship and advanced to the Sweet 16 of the NCAA Tournament. Cornette scored more than 1,000 points during his BU career while also leading the team in rebounds for three consecutive seasons and in blocked shots in four straight seasons. His efforts landed him on the Horizon League All-Defensive Team in three of his four years at BU. Cornette was the Co-Recipient of Butler’s Most Outstanding Male Athlete Award in 2002-03 and was also chosen to Butler’s 15-player Team of the Sesquicentennial in 2005-06. Cornette passed away in 2016.

Ewing is the all-time leading passer in Butler football history with 8,094 career passing yards. At the time of his graduation, he was also the all-time leading passer in the Pioneer Football League. The two-time Butler Most Valuable Offensive Player of the Year held 14 Butler and eight PFL passing rebounds at the end of his collegiate career. Ewing still owns Butler’s single-season passing record when he threw for 3,182 yards in 2000. That same season he broke Butler’s single-game passing record with 497 yards vs. San Diego. He earned First Team All-PFL honors in 2000 and was also named honorable mention I-AA All-America.

A standout runner at Butler, Lubbehusen was a two-time Midwestern Collegiate Conference individual cross country champion as well as a two-time All-MCC selection. The four-year letterwinner was the MCC Indoor Track Champion in the mile during the 1996 season. That same year she won the 1,000-meter championship at the MCC conference meet. Lubbehusen’s times in the 1,500, mile and 3,000 were Butler records at the time of her graduation.

Ribordy led Butler in both tackles and sacks during the 1986 season. In 1985, he ranked second on the team in tackles, but led the team in sacks during his junior campaign. The two-time First-Team All-Heartland Collegiate Conference recipient earned Butler Defensive MVP honors as a senior.

Consistent donors to Butler for more than a third of a century, Sellick and his wife, Jackie, endowed three scholarships. They also made gifts to the Butler Fund and several athletic funds, including the restoration of Hinkle Fieldhouse. In 2007, Bud and Jackie Sellick received the Ovid Butler Society Mortarboard Award. In 2014, Bud also was honored when he received the Butler Medal. With a large gift of from their estate benefiting Butler Athletics, the Lacy School of Business, and general University support, the Butler Bowl has been renamed the Bud and Jackie Sellick Bowl. As a student, he was involved in the band, Kappa Kappa Psi band honorary, and Delta Tau Delta fraternity. In 1947, he began his successful career as an insurance agent in the Indianapolis area. Mr. Sellick passed away in 2015.

The 1995 men’s soccer team won Butler’s first-ever Midwestern Collegiate Conference Tournament Championship. They ended the season with an 18-5-1 overall record that included a 6-1-1 mark in the MCC. The Bulldogs entered the conference tournament as the No 2 seed, but upended No. 1 seed Detroit in the championship match. The overtime win would send Butler to their first-ever NCAA Tournament where they defeated Central Connecticut State in the play-in game. The Bulldogs would eventually reach the Sweet 16 by defeating national power Indiana 1-0. The talented 1995 roster set or tied 11 team and individual records.

Every member of the starting five on the 1981-82 women’s basketball team ended their collegiate basketball career at Butler with more than 1,000 points. The core unit of Liz Skinner, Barb Skinner, Beth Piepenbrink, Elza Purvlicis, and Sue Morris helped Butler post a 23-3 overall record and reach the AIAW National Tournament. The 23 wins in a single-season places the 1981-82 team in a four-way tie for the third-most wins in program history.