Butler Newsroom > Butler Home Page > Home Feature News > The Total Solar Eclipse is Coming (South of Us)
Does He Think He Can Dance? He *Knows* He Can Dance ‘Doc’ McGowan in Retirement: Reading, Writing, Thinking

The Total Solar Eclipse is Coming (South of Us)

The first total solar eclipse over the continental United States in 38 years will be visible south of Indianapolis in Illinois and Kentucky on August 21, but Indianapolis residents will still get to see a 91 percent partial eclipse, Associate Director of Butler University’s Holcomb Observatory and Planetarium Rick Brown says.

And the best place to see the eclipse locally? Probably your own back yard. 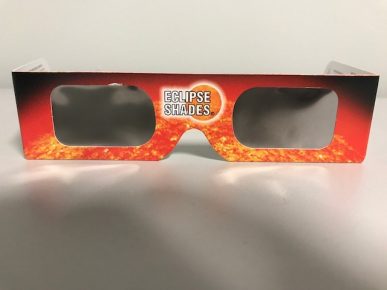 “You don’t need to go anywhere to see it except an open area where the sun would normally be visible,” Brown said. “But you’ll need to wear solar eclipse glasses during this time if you want to look at the sun. They have special filters that prevent your eyes from having permanent damage.”

The partial eclipse—which occurs when the moon passes directly between the sun and earth—will be visible in Indianapolis beginning at 12:57 PM and will end at 3:48 PM, reaching its maximum blockage at 2:24 PM when the moon will block approximately 91 percent of the sun.

During a total solar eclipse, the corona of the sun—the gas that surrounds the sun—is visible, Brown said. Normally, it can’t be seen because the sunlight is too bright.

“Sometimes during a total solar eclipse, if you’re lucky, you get to see some stars in the background during the daytime,” Brown said. “And sometimes you can see solar flares and prominence, which are explosions on the surface of the sun.”

Brown said that the Holcomb Observatory and Planetarium will be closed on August 21. Staff members will be heading south to get the best possible view of the total eclipse.

“There’s really no benefit to being at an observatory during our partial solar eclipse,” he said. “The sun takes up about half a degree in the sky, which is less than the width of your finger at an arm’s length. So if you looked at that through a telescope, first of all you’d be magnifying the sun’s light, which would make it even more dangerous, and secondly we would be enlarging it out of our telescope, so you’d only be able to see a small portion of it.”

Special glasses to view the eclipse are for sale for $2 each at the Holcomb Observatory during weekend hours, which begin at 8:15 PM. For more information, visit https://www.butler.edu/holcomb-observatory.