BITS Brings Out 1,500 Volunteers to Help In Indy 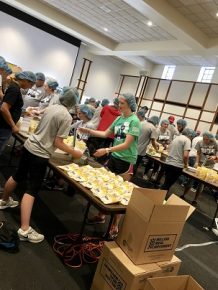 You would’ve thought there was a party in the Reilly Room on Saturday, August 26. Music was blasting and everyone was moving. But the students and community members were doing a lot more than just belting out tunes. They were boxing up food as part of Bulldogs into the Streets (BITS), Butler University’s annual day of service.

Sophomore Kayla Garrison was one of them. “Today, we are packing meals for Hoosiers that are food insecure. One in four kids in Indiana has trouble getting food right now,” she said. “So we’re packing for them.”

Garrison’s assembly line, dubbed “Dawgs Gotta Eat,” packed 180 meals within the first hour, adding to the grand total of 25,000 by the day’s end.

The packing party was spearheaded by the Million Meals Movement, a humanitarian food organization that feeds Hoosiers and empowers volunteerism. 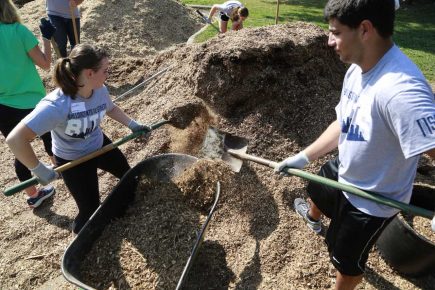 And that’s just one BITS location.

Altogether, more than 1,000 Butler representatives volunteered in more than 40 locations. Butler President James M. Danko was pleased with the turnout.

“Our BITS participation has gone up 50 percent in only two years,” Danko said at the BITS kickoff Saturday morning. “We’re about to provide 4,500 hours—over $100,000 worth of labor—to our neighbors. Now, that’s the Butler Way.”

In other words: “It’s crazy great.” At least, that’s what Mark Varnau exclaimed as he bustled around the Boulevard Place Food Pantry helping supervise. “We don’t have the time or the energy to get some of this stuff done,” said Varnau, who regularly volunteers at the pantry.

Eight hundred families utilize the pantry each month, Varnau said. That’s why the BITS volunteers spent time organizing the food storage and cleaning up the grounds. 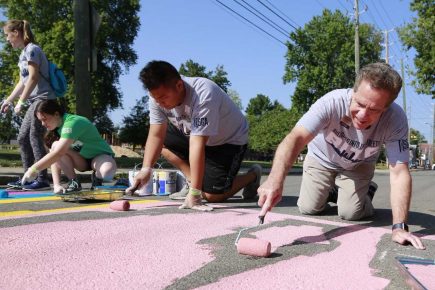 Sophomore Alyssa Mason and first-year Jack Carlin were part of the clean-up crew. Mason, a BITS site leader, was tasked with encouraging and leading the other volunteers. But she wasn’t afraid to get her hands dirty.

“We’re weeding and putting down some mulch for their landscaping,” she said, adding: “You think that hard labor won’t be very fun, but when you’re with other people, it can be lots of fun.”

Carlin also noted the significance of such an event. “There are so many people on campus. It’s important that we reach out and help the town around us.”