The 6-year-old IPS/Butler Lab School has been so successful and in demand that the Indianapolis Public Schools has asked Butler’s College of Education to create a second school. 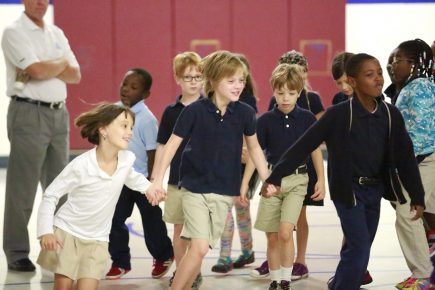 If all goes as planned, the Eliza A. Blaker School 55 at 1349 East 54th Street, named for the founder of the school that eventually became the Butler College of Education, will become the second lab school overseen by the University. The new school, located about three miles from the Butler campus, would open in fall 2018.

The original Lab School, located at 3330 North Pennsylvania Avenue, teaches pre-kindergarten through eighth grade. Officials from Butler’s College of Education officials and Indianapolis Public Schools (IPS) are still discussing which grades would be taught in the second lab school.

The IPS Board is expected to decide on the second lab school in September.

College of Education Dean Ena Shelley said IPS Superintendent Lewis Ferebee and Deputy Superintendent for Academics Wanda Legrand have asked to replicate the first Lab School because of the large waiting list for the current school.

“They’re very pleased with the success of the Lab School,” Shelley said. “It’s been so well received by the community. So many parents are really interested and intrigued by this idea. They love not only the approach, which is different, and the environment, which looks different, but they love the University involvement and commitment to this.”

The Lab School, inspired by the teachings of Reggio Emilia Italy, is a project-based school that builds its curriculum with the children’s interests in mind. Classes often engage in long-term projects that intertwine into all aspects of the day.

The school uses the workshop method for teaching reading, writing, and math, which means that once the students are taught a lesson in that subject area, they are then released to work throughout the room. Children are encouraged to communicate and ask questions of one another during these times, and they frequently work in pairs and groups to encourage communication and problem-solving strategies.

In practicing the Reggio Emilia philosophy of teaching and learning, the school considers the environment to be the third teacher. Students are encouraged to explore and interact with their surroundings. Instead, the students choose seating that fits their learning/work style.

Nearly all the teachers at the first Lab School are Butler alumni, as is Principal Ron Smith ’88, MS ’96 and Assistant Principal Nicole Ciegelski Kent ’10.

“It is a joy to work with a staff where most graduated from Butler and all share similar values and beliefs about children and learning,” Smith said.

Smith said the Lab School’s academic performance data is on the rise. “This year, our third-grade mathematics competition team finished second in the district and our fourth-grade team finished first.  Attendance is consistently over 97 percent and our family involvement is extraordinary. There is much to celebrate.”

Shelley said she is happy to see the Lab School idea expand.

“I smiled,” she said, “and I thought: Eliza, you would be so happy to know that this is where the College of Education is today.”