In the HRC, a Blank Wall Becomes a Canvas

One wall gets a new look — a painting depicting the front of Hinkle Fieldhouse.

Butler Director of Recreation Scott Peden was running on the track in the Health and Recreation Center (HRC) when he noticed the number of blank walls.

“I saw this particular wall,” Peden said, referring to the north entrance, “and thought: ‘We need to put something there.’” 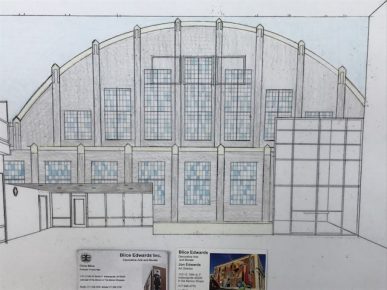 An artist’s rendering of what the completed painting will look like.

So he turned to Chris Blice and John Edwards, who painted the mural in the Robertson Hall Johnson Boardroom as well as the historical mural in the Wildman Room in Hinkle Fieldhouse.

But Blice and Edwards were thinking big picture.

“They came back to me with a vision that was 10 times what I’d thought of,” said Peden. “They wanted to make the entire wall a mural.”

Blice and Edwards proposed creating a massive rendering of Hinkle Fieldhouse from the outside looking in. A glimpse of the Hinkle magic.

“We didn’t want the colors to be overpowering or realistic, though,” Edwards said. “It needed to blend in with the room.”

The room, Peden said, is somewhere students often come to study or relax. He thinks the mural will enhance the soft space even further.

The new mural will hold special significance for the graduating class of 2010, which helped fund it. According to Peden, when the 2010 graduates couldn’t decide what to do with their class gift money, they gave it to the HRC.

“The HRC meant so much,” Peden said. “They were the first class to have use of it for four full years. They really valued it, and they also valued Hinkle.” 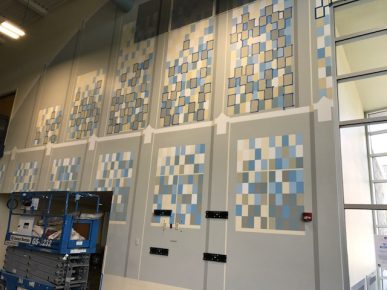 The painting in progress.

When he contacted the 2010 class president and shared the idea, she was “extremely excited.” The class gave its blessing and the Hinkle mural got the green light.

Blice and Edward began work on Monday, September 11, and they were still working on it as this story was being written.

In the meantime, they’re discussing where they want to paint their next Butler mural. “It’s very special,” Blice said of the experience. “This is our neighborhood college and we love Butler.”