How Butler Prepared Him for the Mayo Clinic

As an undergraduate at Butler, Robert Jacobson ’80 participated in a dizzying array of activities—debate team, student government, dorm governance, writer, and cartoonist for The Butler Collegian—while majoring in pre-med.

All of that, he told students in the Pre-Med Society over lunch on September 21, shaped and prepared him for the rigors of medical school and a career in pediatrics at the Mayo Clinic. 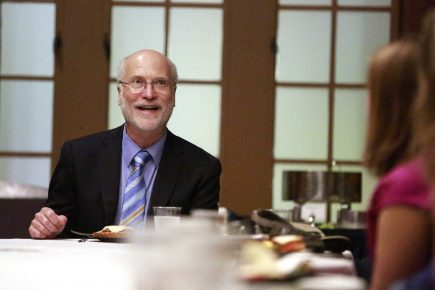 “I would say Butler is a great place for professional preparation,” said Jacobson, who grew up in Indianapolis’ Warren Township. “Butler offers you a lot of opportunities to challenge yourself, and medical schools are looking for how well you do on the standardized tests and how well you’ve challenged yourself. They want to see students who did hard work and did well with that. Butler offers you that. At the same time, Butler offers you a chance to explore who you are and what you’re capable of doing.”

The Center for High Achievement and Scholarly Engagement (CHASE) invited Dr. Jacobson to be the first speaker in its alumni speaker series, which is designed to connect graduates with current students in the Honors Program. Jacobson, who graduated with Highest Honors in Chemistry, shared his story with several science classes, groups of students interested in pursuing medicine, and, on Thursday night, nearly 100 people in the Reilly Room.

He shared fond memories of how he met Renee (Oehler) ’81, a Pharmacy major, on his first day at Butler. How, as a sophomore, he created a dorm-based fraternity event called the Ross Hall Rat Race that featured competitions such as the blindfolded maze and a mattress race and ended with a dance. How he helped Renee, who ran the campus movie series, promote a screening of The Exorcist by drawing a poster showing a girl vomiting and the caption “Guess What’s Coming Up This Friday.”

And he told how lessons he learned gathering evidence as part of debate preparation inspired him as he advanced from medical school at the University of Chicago to residency at Yale University. At Yale, one of his mentors told him that no one should take a job in clinical medicine without touring the Mayo Clinic.

Jacobson was already a fan of the world-renowned clinic—he had signed up for the free monthly magazine Mayo Clinic Proceedings while at Butler. On the tour, Jacobson noted the clinic’s practice of evidence-based medicine that depended on research.

“I fell in love with Mayo Clinic,” he said. “It was everything a former debater from Butler would love about medicine because there was real evidence for what we did and I could be part of gathering the evidence just the way I started in September of 1976 for the debate team at Butler—collecting evidence.”

Jacobson said he originally intended to be an internist, and found pediatrics mortifying. “The first child I ever drew blood from was dying of measles in a hospital bed.” But the first rotation he had as a four-year resident was ambulatory pediatrics, and he found it intriguing that every child, depending on their age and their development, offered a different aspect of “the differential diagnosis”—the list of diseases you would consider in making a diagnosis.

He had found his calling.

Jacobson advised students to “realize what you can deliver and are good at.” He said he had been active in student government at a university-wide level, but he found dorm activities to be a better fit. “While I got a kick at times from butting heads with our President, Alexander Jones, and Herb Schwomeyer, the Dean of Men, it wasn’t the thing I really enjoyed. So ask yourself: What am I good at and what do I enjoy doing? And how can I do that better?”

He also offered advice about:

-The importance of the Honors Program. Good students often hear that they’re doing well, he said. “The Honors Program gave me the opportunity to hear, ‘That’s not good enough. You’ve got to do that over.’ The program pushes you and prepares you for medical school, where everyone is an exceptional student.

-Writing a thesis. “Even if you don’t think of yourself as a great writer, you are writing it down and trying to make the sentences match and click with the evidence. In making your arguments, you will learn so much more.”

-Starting on projects immediately. “I think there’s a real danger in procrastinating because something’s difficult. I think that if you have work assigned, spending a little time on it every day is better than saving it up. Get working now rather than putting off the big things.”

“Butler will do a great job preparing you for how to study, how to think, how to present yourself, and how to be efficient with time,” he said. “There will be doubts in your mind whether the degree of work is worth it. But boy, I swear I meet people in all walks of life who will tell you that about their career—there were certain points where they were questioning it. But the great thing about health is the problem you’re trying to solve won’t go away. There will always be ill people who need your help. To have a career where you’re helping a person, you can keep coming back to: That’s worth it.”