Now that you’ve seen the solar eclipse, Butler University’s Holcomb Observatory and Planetarium invites you to go farther out with In Search of Alien Earths: The Sequel to Our Solar System, a new show that highlights the exponential growth in the number of known planets outside our solar system. 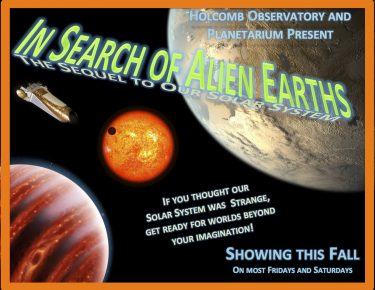 Admission is $3 for children and students under 18, and $5 for adults for the planetarium show. Viewing through the telescope is always free. For more information, visit www.butler.edu/holcomb-observatory.

While most of us have grown up thinking there are eight planets, actually there are thousands, said Professor Brian Murphy, Director of the Observatory. In fact, more than 3,500 have been discovered and confirmed as planets since 1995, and another nearly 4,500 are candidates to be added to the list of planets.

Of those, only a handful, like Earth, are perhaps capable of sustaining life. (The closest, Proxima Centauri, is approximately 4.3 light-years from Earth.)

Visitors to the show will hear all about these Hot Jupiters, Super Earths, mini-Neptunes and more. Afterward, visitors will have an opportunity to view through Indiana’s largest telescope, weather permitting. Objects that are being observed may include the moon, the planet Saturn, M13 (a globular star cluster), Alberio (a binary star), and/or M57 (the Ring Nebula).

The celestial objects viewed through the telescope change seasonally.

Murphy said there could be as many as 200 billion planets in the galaxy.

“What we’ve found so far is just the tip of the iceberg,” Murphy said. “The key questions: Are we alone? Are there other Earths? What have we found? People will be very surprised by this show.”