To tell the story of the Butler Business Consulting Group (BBCG), it helps to look at the numbers.

The BBCG, which helps businesses solve their challenges, has worked with 94 clients, including Roche Diagnostics, Defenders, Hitachi, Eskenazi Health Foundation, and MJ Insurance. 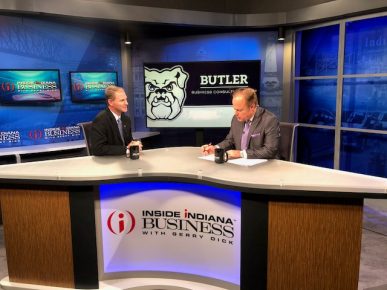 It’s generated over $10 million in revenue— $7 million of which has been returned to help continue to fund academic programs in the Lacy School of Business.

About 192 Lacy School of Business student analysts have had an internship with the BBCG, and they have participated in over 300 projects with client companies representing 40 different industries.

And now, the BBCG has a number of its own to celebrate. The group is marking 10 years of serving the Indiana business community, Butler University students, and the University this year.

Executive Director Trent Ritzenthaler is proud of those numbers. He’s even more proud of the stories behind the numbers.

One of Ritzenthaler’s favorites to tell is about the BBCG’s longtime relationship with Estes Design and Manufacturing, a family-run sheet metal fabricator on Indianapolis’ Eastside and one of the consulting group’s longest-standing clients.

In 2008, Ritzenthaler said, Estes approached the BBCG about increasing sales of its products, which include metal fabricated mailboxes and metal cabinets. Estes bends the metal needed to manufacture those products.

That was just the beginning.

Over the years, the BBCG has guided Estes through potential acquisitions of other companies, provided outsourced financial services support, and even provided a short-term loan from the BBCG Investment Fund to purchase a piece of equipment integral to the growth of their operations. 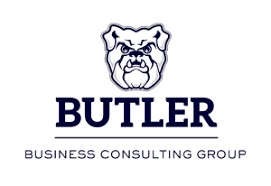 “We’ve helped bring a lot of positive change to that company in a lot of ways, and they’ve been a great partner in doing so, allowing our professional staff and student analysts to play tangible roles in bringing about those positive changes,” Ritzenthaler said.

“The professionalism they have exhibited and the whole model of using interns, whether they be undergrad or grad students, has been great,” he said. “They’ve got a great business model. I tell Trent all the time that I would have killed to have done something like that in college and been able to get that experience.”

The BBCG got its start in 2005 thanks to a $22 million grant from the Lilly Endowment Inc. to help accelerate experiential learning.

A portion of the funds were used to create what was initially called the Butler Business Accelerator. With the money came a mission: Help Indiana companies that have been in business for five years and were generating between $5 million and $50 million in sales grow, prosper, hire more people, achieve their goals, and stop Indiana’s brain drain.

The Accelerator started serving clients in 2007 and then became the BBCG in 2012.

Ritzenthaler said the BBCG provides benefits not only to its corporate clients, but to Butler (both by earning money and by familiarizing companies with Butler and its programs) and to Butler students (for internships and experiences that help them start and advance their careers). He called it “the cyclical positive effect of those things on each other.”

As an example, he cited the BBCG’s work with MJ Insurance.

And in October, a member of Butler’s Information Technology staff moved over to MJ full time to serve as their new Chief Information Officer.

“You’re helping students, who are helping clients, who are hiring students and donating back to the university and helping academic programs,” Ritzenthaler said. “That is a dynamic set of positive changes for all of the stakeholders involved.”

Kate Allen ’15 interned with the BBCG as a student and worked on at least five projects. Allen said she was given great responsibility and autonomy. She had three other internships while at Butler, and the BBCG, “was a totally unique environment.”

Allen now works in finance for Eli Lilly and Co. She credits her experience at the BBCG with helping her get ahead.

“Being able to use my interpersonal skills and problem-solving skills in the BBCG and then apply that to my first full-time job has been really helpful,” she said.