Inside a Lilly Hall practice room, a father is sitting on the piano bench next to his 6-year-old son, encouraging the boy to look at the sheet music and play.

The boy plays the note. 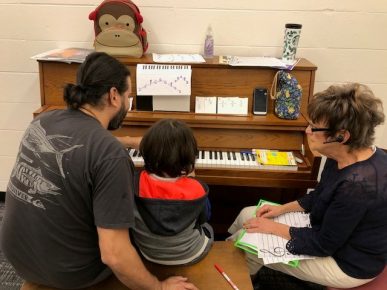 “And there’s that sharp,” says the piano teacher, who’s sitting to the side. “See that sharp there?”

The boy plays the next note. “Yes!” the teacher says.

Then the boy, who is autistic, stops and lets out a howl of sadness, as if he doesn’t want to play anymore. He hugs his father and turns away from the piano. Then, just as quickly, he’s back around, his hands on the keys.

The entire 45-minute lesson takes place in fits and starts like this, with the teacher and the boy’s father coaxing him through pieces of a song. As soon as he’s finished, the boy climbs from the piano bench and heads to a chair to watch videos on a phone. His father directs him back to the bench.

The boy started taking piano lessons in the summer after his parents found a flyer in a doctor’s office advertising piano lessons for children on the autism spectrum. The teacher, Marge Lucas ’97 MM ’00, has been offering these lessons through the Butler Community Arts School since January.

Lucas believes music is highly successful in the development of neural circuits for cognitive processing, and she has developed a method of music instruction—honed at Butler and in graduate studies at Indiana University-Bloomington—that is applied to the individual learning style and personality of the student.

Her method involves a combination of letters, colors, and sounds that help students process the information needed to play music while developing motor and language skills.

She explains it like this: “For children with autism, they have overconnectivity and underconnectivity. The ones I get are usually already gifted in music, and they have absolute pitch. So their right hemisphere is overconnected. The left hemisphere is language. So they’re overconnected in spatial skills. But they are underconnected in language. Therefore, they can’t express themselves. But if you develop their musical ability and teach them according to the natural progressions of scale degrees and chords, their brain is wired to hear that.”

Lucas, who has Asperger syndrome, says she can understand her students, whereas other people don’t. And she says she has seen her methods work. One student, who started out “almost non-verbal and definitely in his own world,” developed the ability, after eight years of lessons, to do music theory on a graduate level. Another, a 12-year-old she’s been teaching for three years, went from banging on the low notes of the piano to being able to play the title theme from The Legend of Zelda video game.

With the 6-year-old, she had an extraordinary breakthrough two weeks later when the boy began to get distraught. His father said something to him, and the boy responded, “I’m tired.”

“His parents looked at each other, stunned.” Lucas said. “They said they had never heard him say anything like that ever before. Instead of a wail came a short sentence. It made my day.”

The father of the 6-year-old student says Lucas’ methods do work. His son practices piano every day.

“My son is very intelligent,” he says, “but it’s a different kind of intelligence.”

Butler Community Arts School Director Karen Thickstun says she regularly gets calls from parents whose children have autism, asking if she had a teacher who works with students who have learning differences.

“Most of the time, I had to say no,” Thickstun says, “because our teachers are primarily college students and they’re not yet trained to teach more than the traditional approaches to teaching.”

When Thickstun did offer a referral, it was to Lucas, who has been teaching privately for years. Last year, she talked to Lucas about devoting a day to teaching at Butler. Lucas’ presence proved so popular that she is now at Butler for more than a day each week, teaching six to 10 students.

“She’s one of the very few piano teachers in the state—maybe in the Midwest—who’s specializing in developing piano materials to reach autistic children,” Thickstun says.

Lucas’ presence also benefits Butler students, who can watch what she’s doing. Thickstun says the skills Lucas has are ones that teachers are going to need to know more and more.

Thickstun says that what Lucas does requires patience, but also the ability to think differently.

“She has to get into their mind and find different materials that fit,” Thickstun says. “In the students I see her work with, the materials are different for each child. She’s very much trying to figure out that particular child. Marge has been a great addition to the Butler Community Arts School. Part of our mission is access to the arts for everybody, and this is a demographic we have typically not been able to serve.”