Gift from the philanthropist and his wife resulted in the renaming of the College of Business.

Andre B. Lacy, the man for whom Butler’s Lacy School of Business is named, was killed Thursday, November 30, in a single-rider accident while on a private motorcycle tour in southern Africa. 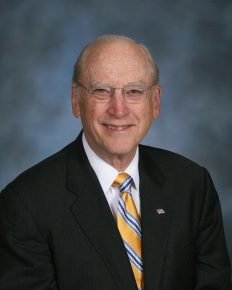 “We are saddened to share the news that Andre B. Lacy passed away this morning,” said J.A. Lacy, chief executive officer and president of LDI, where Andre Lacy was Chairman of the Board. “Andre was known for his entrepreneurial fire and sense of adventure in business and life. We take comfort knowing that he passed away while pursuing one of his passions in life, and are inspired by the legacy of leadership that he leaves.”

Steve Standifird, Dean of the Lacy School of Business, issued this statement:

“It is with great sorrow that I share with you that Andre Lacy was killed in a motorcycle accident earlier today. There will be a university wide note coming out from Jim Danko later today. I wanted you all to be made aware of this incredibly tragic news prior to the university announcement.

“Andre and Julia Lacy will be remembered in perpetuity for their transformational gift to name the Lacy School of Business. For those of us that have had the good fortune of working with Andre as Senior Advisor for the school, he will be remembered as someone who cared deeply for the success of the school and of our students.

“Andre had become a central figure in the Lacy School of Business. I have personally benefited immensely from his insights. That said, the most meaningful moments for me have been his one-on-one conversations with our students. He had the unique capability of connecting with our students in the most meaningful of ways. He was more than a Senior Advisor; he was a friend, colleague, and inspirational leader for many of us. He will be deeply missed by many.”

Butler President James M. Danko said in an email to campus that Lacy was “a dear friend to Butler University.”

“The transformational gift from Andre and his late wife, Julia, built upon a nearly decade-long relationship with the University,” Danko said. “Their gift went far beyond a monetary commitment; in sharing their family name with Butler, Andre and Julia Lacy created a legacy for young businesspeople in the city they love. They endorsed The Butler Way, and everything it stands for—especially caring for others and leading with integrity.”

Following graduation from Denison University, Lacy started his career at LDI’s founding enterprise, U.S. Corrugated Fibre-Box, where he worked his way through the corporate ranks. Following the sale of U.S. Corrugated, he was named executive vice president and chief operations officer of the newly created Lacy Diversified Industries, the holding company that would become LDI. He was elected CEO of LDI in 1983 and Chairman of the Board in 1991. He remained chairman following his retirement from LDI in 2006.

A strong advocate of civic progress, especially economic development, agriculture, and education, Lacy was co-chair of the Cultural Trail fundraising committee and a co-creator of Conexus. In 2009, Governor Mitch Daniels appointed Lacy chairman of the Indiana State Fair Commission, a role in which he remained in until his death. As commission chair, he was a driving force behind the State Fair Coliseum restoration. 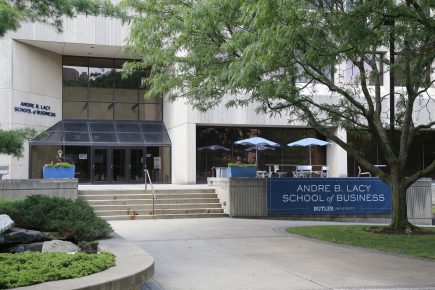 Lacy provided leadership for many boards, including the United Way of Central Indiana, Indianapolis 500 Festival, Indianapolis Public School Board, and Economic Club of Indianapolis. He served as an advisor for the Lacy School of Business at Butler University. He was also an alumnus of the Stanley K. Lacy Executive Leadership Series (SKL) and served as moderator of Class XV.

In addition to his civic contributions, Lacy was active on numerous corporate boards, including Hulman & Company, Herff Jones, Patterson Companies, Inc., Ethyl Corporation, National Bank of Indianapolis, and Indianapolis Power & Light Company. He is past chairman of the Indiana State Chamber of Commerce and the chairman of the National Association of Wholesaler-Distributors.

Governors Roger Branigan, Robert Orr, and Mitch Daniels each recognized Lacy as a Sagamore of the Wabash.

Information regarding funeral arrangements will be announced in the coming days.