And They Said It Wouldn’t Last: Richard Clark’s Orchestra Turns 30

Butler Professor of Music Richard Auldon Clark started his group, the Manhattan Chamber Orchestra, in 1987. By 1989, the orchestra was performing at Carnegie Hall, and by 1990, it was being reviewed—favorably—in The New York Times.

“Many big names in the profession told me the group won’t last,” Clark recalled. “‘You’re doing great work, it’s a nice way for you to get started. But the group won’t survive.’ Well, they’re wrong. Tons and tons of recordings later and live radio broadcasts and Carnegie Hall shows and performances and international attention, we’re still here.”

Not only is the group still here, but it’s getting ready for a 30th anniversary concert at Symphony Space in New York City on November 21. The concert will feature music by Clark, Howard Cass, Seymour Barab, Eric Ewazen, and Alan Hovhaness.

“I play with the group, sometimes I’m conducting, sometimes they’re playing my music,” he said. “Most composers whose work we perform are living and friends of the group. It’s become a real clique in New York, a modern music clique.”

Over the years, the size of the group has changed—it started as 70 musicians, and now it’s 16—and a number its members have graduated to great organizations such as the Metropolitan Opera Orchestra, New York Philharmonic, and the Chicago Symphony.

But the Manhattan Chamber remains Clark’s baby. So at least once a month, he drives from Indianapolis to New York for rehearsals and performances.

“It’s a really good group of players who are really dedicated,” said Clark, who started teaching at Butler in 2003 and serves as conductor of the Butler Symphony Orchestra. “And I’m the chief cook and bottle washer. There’s a thrill to having your own group of musicians that you work with, people who you really know and really trust.”

But as much as he loves being in New York and playing with his orchestra, Clark said he also appreciates returning to Indianapolis, where the garage on his house is bigger than the Manhattan apartment he used to rent. 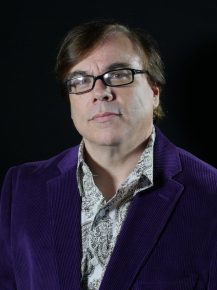 For one thing, he can devote more time to composing while he’s at Butler.

“It’s a focused, wonderful environment to create,” he said. “In New York, I was always running around like a madman playing every gig, every show, every concert, teaching in between. Freelance life in New York is a wonderful thing to do when you’re young, but it grows weary.”

Last year, thanks to a sabbatical and financial support from Butler, Clark was able to finish the opera he wrote with Kurt Vonnegut, based on the author’s play Happy Birthday, Wanda June, and see its world premiere performed by Indianapolis Opera.

“That was one of the landmarks of my composing career,” he said. “And that was all because of Butler.”