For civil defense attorneys, it’s the equivalent of a lifetime achievement award.

Doug King ’73 describes himself as someone who “goofed around a lot” at Butler, “was not very academically oriented,” and “barely got into law school.” 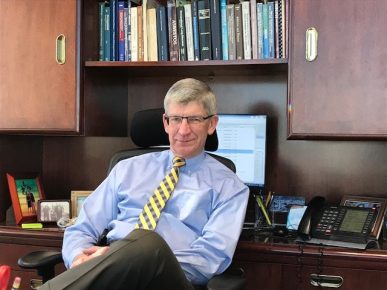 “When you are recognized by your peers, by people who do the same thing you do, and they know how hard it is to do, that really means something,” King said, sitting behind the desk in his 18th-floor corner office in downtown Indianapolis.

King is now 41 years into his career as a Civil Defense Attorney with Wooden McLaughlin, where he defends companies in asbestos and medical device product liability cases. (More about his notable cases can be found here.)

His roots, though, are decidedly blue collar. He grew up in Chesterton, Indiana, the son of a steelworker, and dreamed of becoming a lawyer. He chose Butler for undergraduate studies, following in the footsteps of his brother Jon ’68 (now CEO at Synovia Solutions in Indianapolis).

To pay for school, King worked in the mills every summer during college. He keeps a picture of himself and others from the steel mill on his desk “to remind me that whatever kind of pressure I may be feeling, I’m not there.”

At Butler, King double-majored in History and Political Science. He was elected President of Phi Delta Theta twice. (He boasts that he works alongside Butler Phi Delt brothers Ron Salatich ’67 and John Nell ’68) and worked as an Office Assistant for Professor George “Mac” Waller, who later wrote Butler University: A Sesquicentennial History.

King also had a hand in a campus protest against the rule that women had to be inside by 11:00 PM weekdays and 1:30 AM on weekends. He remembers University President Alexander Jones calling the police, who brought dogs to chase the protestors into the Phi Delt house.

“It was women’s hours—not exactly an earthshaking issue—but to us it was a big deal,” he said. “Everybody thought it was unfair and paternalistic and that we were adults. Which, of course, we weren’t.”

When he got to Indiana University School of Law, King turned his academics around, thanks largely to professors who scared him with statistics about the number of students who flunk out. King decided he wanted to be a Criminal Defense Attorney, a real-life Perry Mason. But as a second-year law student interning for a Public Defender, he helped acquit a man who had stabbed a high school cheerleader 56 times.

“That really turned me off,” King said. “I never wanted to do criminal law again after that.”

Over the years, King has tried more than 100 cases, including representing Bloomington Police in the shooting death of former IU football player Denver Smith. King was named Indiana Defense Lawyer of the Year in 2003 by the Defense Trial Counsel of Indiana, and in 2005 the American College of Trial Lawyers elected him a fellow.

King said studying History at Butler has served him well throughout his career.

And he has stayed close to Butler. He travels with the men’s basketball team—most recently to Portland for the PK80 tournament in Portland, Oregon—and proudly displays Butler memorabilia in his office.